Some Details on This Week's Releases 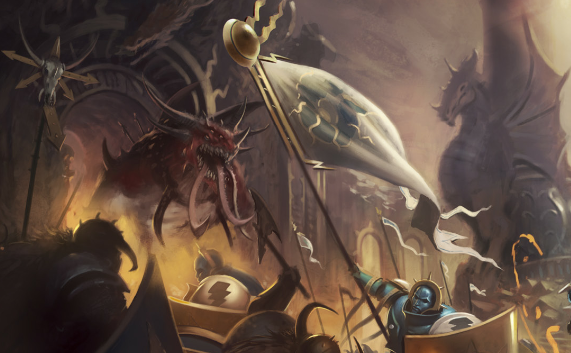 This week's releases are most definitely are focusing on the Khorne Bloodbound Battletome and models for the Age of Sigmar.

A big thanks to aracersss for helping to point out the details.

- Slaughterpriest, kind of a tall dude so he shall stand out in an army. Good looking model IMO, remind me a lot of the old Confrontation giants for those who remember them.

- Skullgrinder, regular looking Khorne guy n°2456, Blacksmith who fights with some sort of flaming flail hammer... no wait scratch that, it's a flaming flail anvil! Don't ask, I think Khorne dudes believe you don't hit the metal on the anvil, but that you hit the metal WITH the anvil.
Big problem I have with him is that he suffer from the same problem that many Aos miniatures already have: despite being a clampack, in the middle of an army he looks so much like the rest you'll probably lose sight of him. Better make his flames really stand out when you paint him.

- Also Khorne Army Book, same price as the Sigmarines one.

- They appear to be some repackaging of Khorne miniatures for AoS, but their price was not listed in the WD. There is a new Skullcrushers box that now contains 6 of them instead of 3.

Next week hints refer to a pariah/outcast, a victor and some Zone Mortalis stuff I believe.