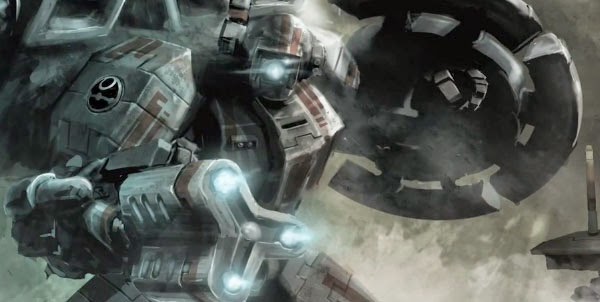 Just incase you needed a little 40k injected into your bloodstream... here are some new leaked images for the Tau. A new Tau big suit called a Stormsurge with lots of missiles, and a smaller version possibly a stealth variant. Also new Firewarriors are seen.... You have to see this!!!


Here are the details as they are just now coming in.....
via anonymous sources on Faeit 212
I can confirm Tau are next out of the gates with at least 2 new battlesuits. A superheavy walker, the XV128 Stormsurge and a Stealthy HQ suit the XV95 Ghostkeel.

below are the links to see the images
you can also seem them here, including the cover on War of Sigmar via Atia
http://war-of-sigmar.herokuapp.com/bloggings/207

The new 'big' riptide. Named the Stormsurge. This is the GW alternative to the forgeworld R'varna. Definitely the heavy support variant.
Clearly carries a massive Rail weapon as the primary, 4 seeker missiles, and a huge missile pod payload. You can also see more missile pods setup for indirect fire, possibly an SMS system.

The legs sport stabilizing rods, which might translate to movement restrictions in-game when firing at full effect.

Lots of optics and targeters, including what looks like an independent targeting AI thingamabob opposite the main weapon. Room for support systems too. Man this thing looks like it will hit so hard. It reminds me of when the Hammerhead was first introduced, with the huge Railgun that was an unheard of S10 AP1 Range 72" and wowed everyone. Pretty much no reason to take the humble hammerhead now...

You get a peak at the new firewarriors, the other new riptide variant, and possibly new crisis suits. We have seen conversions in the past that are very similar to these, so they might just be conversions. Then again, they may have been available back when the Farsight codex was released and were a hidden easter egg.

And here we have the 'little' riptide, plus some extras. No idea what the name is for it. This is GW's alternative to the Y'vahra and definitely looks like a close support stealth riptide. Carrying some sort of stripped down Ion weapon, fusion blasters, possibly a missile pod, and some advanced maneuverability.

Looks like it comes with yet another type of drone, what could they be for? Some sort of close support flechette drone? Either way they look Awesome!

And here you can see the New. Fire. Warriors!!!!!!! Holy crap they look so good. Those carbines look super modern and the new helmets make them look way cooler than before.
I think there might even be a hint at a squad special weapon way down in the front there, but it is hard to tell exactly what it is.


You also get to see the Stormsurge in the background with an Ion primary weapon instead of the Rail weapon. So the SS will definitely have lots of options!