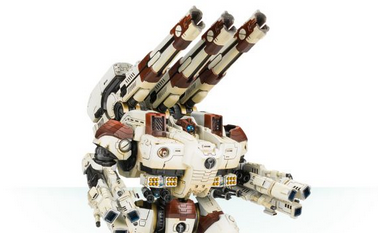 There have been questions about the new Tau Titan, the KX 139. Its a huge model, and already the model has far oversold what it was meant to. If your orders are still pending, don't worry, its coming. Here is a question and answer from Forgeworld regarding the the new model, and how it plays.

via sinistersamurai on Advanced Tau Tactical
http://www.advancedtautactica.com/viewtopic.php?p=297602#p297602
Hello. The Supremacy armor indicates that it is a gargantuan creature, and further describes several rules that a GC gets in a parenthetical.
However, not listed is the Feel No Pain (5+) nor the Stomp rule that the 7th edition rulebook includes for Gargantuan Creatures. Is this oversight or intended? Does the KX139 have Smash and FnP?

Most overwatch-capable Tau units have Supporting Fire, as an army rule. This has not been listed for the suit. Oversight or intended?

All of the Codex Tau suits, (Crisis, Riptide, Stealth, Broadside) get a Blacksun Filter and a Multi-Tracker standard. The KX139 does not even have these standard support systems as options. Oversight or intended?

Hi,
Thank you for your email. The answers to your questions are as follows -

1. It should also list that it has Feel no Pain and Stomp as well, as per Gargantuan creatures.

4. The rules for this will be updated as per the omitted details as soon as we can carry this out. As per any possible future imperial Armour books containing Tau, we do not have any information with regards to this at this time.
9/26/2015
Natfka
Forgeworld, New Releases, News Headlines