DzC: Scourge Take Control of CQB, and Everyone Dies! 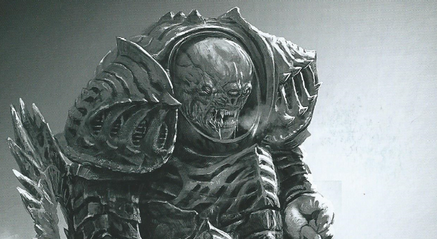 It's been awhile since the new models have come out now for the Scourge. The Eviscerators, and Raider/Screamer, have really altered the landscape for the Scourge units on the table more than any other of the latest releases. Before these releases, the Scourge simply fought OK in buildings, but since has turned into entering any building within their reach, a deathtrap for the enemy. Lets look a little at why.


Simply put, Eviscerators are the new,  "you can't touch this". In a recent example, I had two squads of Eviscerators take out 12 bases of enemy infantry in a building where the opponent needed a single objective to be found. (he was the occupier) While the battle lasted all game, he had to keep sending in infantry to try and find that objective and get his men out. It was just too much of a fight for him there, and while the rest of the battle was not going well for my scourge.... the Eviscerators dominated. Of course I had some fast moving squads in intruders flying around the battlefield quickly taking other objectives.

Eviscerators are simply a point and click type of unit. Keep them back until the enemy enters a building within range of an intruder's insertion. One squad is enough in 1500pts to keep up with the enemy, and two just seals the deal.

Beyond Eviscerators..... there is the Raider. Simply an amazing (and most likely going to be toned down) dropship. A Move and Fire of 9" with two 6" 5 shot E4 flamers that hit on a 3+ is just crazy. You don't need too many infantry in your lists with these guys running around. Not to mention that the Screamers reduce the enemies CQB by half! Yea, that part is often overlooked when you think of how cool the Raider is. I have even used a Screamer to chase down Shaltari Walkers... two E11 claws that hit on a 2+.

Really want to control what's going on in buildings... take two Raiders, and make sure that nothing survives in buildings.

In reality that Raider will be taken down a notch. Hawk Simon was saying that perhaps the accuracy will move down from a 3+ to a 4+, Not bad... but personally I think just reduce the shots down from 5 per gun to 3. With two flamers, and that many shots... the Raider can hit two bases and wipe them out. With only three shots it becomes much harder, and the Scourge player will have to decide between possibly only killing a single base, or doing a lot of damage to two bases.

As it stands, the Raider has removed the usefulness of the Scourge Tormentor almost completely.
9/19/2015
Natfka
Dropzone Commander, Hawk Wargames