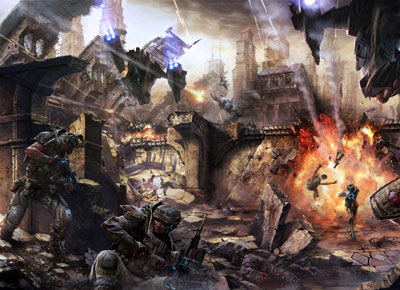 Continuing the Game rules discussion that has been going on now since last week. We are discussing a set of custom rules for a game that has been in development here at Faeit 212 for the last couple years or so. The game system itself will have more revealed as we work through the rules concepts, and your input has been a great help.

Traditionally our tabletop games have been one army completes all their round's actions followed by the opposing army. Going first has been vital, and alpha strike armies have come in and out of the meta. The last few years I have felt that this type of gameplay is rather outdated.

Many games have moved past this type of  entire army activation, and alternated game play during a single game round/turn. How this is done is widely different with each game, and even who goes first each round.

Alternating Activations
Game play in our ruleset is divided into Game Rounds, where each round is divided into player turns. Each player will activate a number of units equal to or less than the Leader or Commander's Command attribute each player turn. Player turns then alternate until all units on both sides have activated every unit on the table.

For example with an Army Leader's Command of 4, I am able to activate up to 4 units before my opponent gets a chance to take his player turn.

You always get to activate a minimum of 2 units per activation.

Gaining Initiative
Each game round of play, the last person to activate a unit passes initiative to the other player. A player with initiative goes first the following game round. Gaining initiative in the first round of play goes to deployment zones and is handled during game set up. (We talked briefly about this during a previous article that you can read here at this link.  Game Set Up)

Challenger    Army with Iniative
CMD+d6 vs CMD +d6 + Round Bonus

Ties to the Army with Initiative.