Named Bloodthirster and Skarbrand to Come Next Week 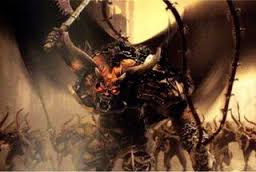 The latest information floating around now is that Khorne is by no means over this week, and that next week a named Bloodthirster and Skarbrand will be released next weekend. The most interesting part of this is that the Bloodthirster was apparently tricked into attacking Khorne by Tzeentch.

via Blood for the Blood God Facebook
https://www.facebook.com/BlogForTheBloodGod
"Just got told by someone who has seen the next two white dwarves that next weekends preorder, not this weekend is skarbrand, apparently he is a named Bloodthirster, big £80 and is an outcast as he was tricked into attacking Khorne by Tzeentch"
9/15/2015
Natfka
Age of Sigmar, News Headlines, Rumors