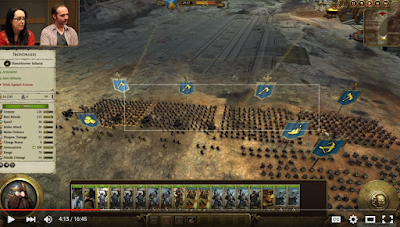 Another video was released today for Total War Warhammer, and is taken from an early battle from the Dwarfs Campaign. Here you get to see more details of the battle, including Giants, Trolls, and more as they fight a massive battle underground battle.

Total War: WARHAMMER Gameplay Video - Dwarfs Let's Play
This Let’s Play is an example of an early Quest Battle from the Dwarfs campaign. In the vast tunnels of the Underway, a Dwarfen force lead by High King Thorgrim Grudgebearer is ambushed by a Greenskin horde. Showcasing new features and never-before-seen units battling underground for the first time in a Total War game, this video is a taste of things to come and a glimpse into the dark and exciting fantasy world of Total War: WARHAMMER.