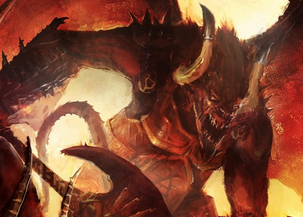 We had a first glimpse at next week's rules already for Skarbrand, and although the 40k rules don't seem to be getting a any real changes, Skarbrand for the Age of Sigmar has what looks like some serious bookkeeping to play (most likely just keep the book open). So lets get a look at his rules, or more accurately, his rage.

Please remember that this is early information as such are still considered rumors. If you missed the previous conversation about Skarbrand and his rules for 40k and the Age of Sigmar, follow the link.
http://natfka.blogspot.com/2015/09/next-weekskarbrand-for-aos-and-40k-plus.html

via anonymous sources on Faeit 212
Ok, here are his rules for AoS
In each of your hero phases look, check and see how much damage he has. If he was not able to attack in any of the combat phases last round, then he is always Incandescent -really really mad-