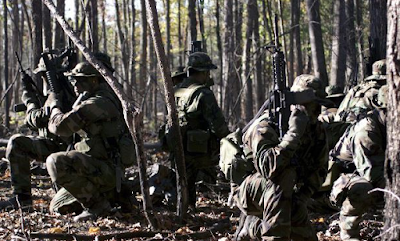 A lot of work has gone into the ruleset we are working on here on Faeit 212 over the last couple weeks. Your input has been great, and every comment looked at. I find it vital to see the communities reactions to specific rules, and to see how they fit into the rest of the ruleset that has taken over 2 years to create. So lets take a look at another unusual concept here with this ruleset, how groups and squads are used.

One thing that has always caught my attention in tabletop wargaming was that squads, once shot up, or reduced in number really were on their own. Ive had plenty of games where what was left of a full unit is essentially useless on the field, after it's special weapons were destroyed. In reality the model had no to very little purpose anymore, and was ignored, unless it wandered too close to an objective.

So one thing I wanted to accomplish, was the ability for squads to join up with other squads, especially when their numbers were low. Or with lesser unit types, the ability to form up into a mob under a charismatic leader.


Unit: A single model or squad that are of the same unit type are called a unit.

Squads: are formed from the same unit type and are activated together. Squads or soldiers are those that have fought and trained together. Squads must maintain a 2” coherency to each model within the squad.
Groups: Two or more units may be activated together if they are within a 2” coherency of each other. Groups are multiple units that join together during a battle. When activated together, they are considered a group for the purposes of any bonuses and a single unit. The number of units grouped may not exceed the lowest command attribute of the group.
For example if one unit has a command of 2 and two others a command of 3, only two of the units may group together.
Leaders can take special abilities to join the masses together in larger groups.

Coordinated Attacks:
Group and Squad Bonuses
Squads and Groups get certain bonuses when they attack a single model at the same time
There are times when attacking with a squad or group are needed to take down the toughest of opponents.
You may sacrifice dice to gain squad and group bonuses to either hit or to add to the power of an attack. Bonuses are always added to the lowest characteristic used.

Squads are models that have trained together, and start the game as a squad and are using the same weapons.
A Group is formed during the game as multiple squads are activated together. You may sacrifice three dice to gain a single +1

To Hit Roll example: Before dice are rolled, a squad of 3 models has three ranged shots. Instead of rolling all three dice separately the player decides to fire all three in a single shot, sacrificing 2 dice to add a total of +1 to the die roll to hit using the lowest models Ranged Characteristic.

Wound Target Number example: After rolling to hit, while generating the Wtn, the player decides to combine 3 hits, sacrificing 2 of the hits to add a total of +1 to the power of a single hit. The +1 is added the lowest strength weapon.

The Rules for this ruleset are almost complete and written out. I expect that the base rules (not the races for it), will be complete within a few weeks or earlier. In total the ruleset for playing the game is 4 pages long. A total of 7 if you include game set up and missions. Once done, I will post up the rules for readers interested. At that point the Setting, Background, and Races involved in it get some attention. (also mostly complete at this point)
9/20/2015
Natfka