The Tau Titan is live now through Forgeworld. As we saw yesterday its called the KX139 Ta'unar Supremacy Armour, and its massive. It's available for pre-orders now. 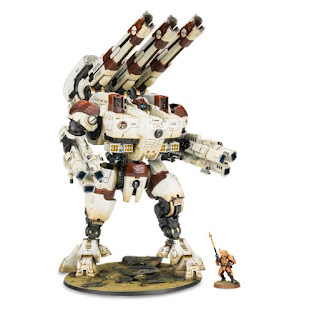 via Forgeworld
http://www.forgeworld.co.uk/en-US/New
Description
Tau Supremacy armour is larger than any other current class of battlesuit. It is intended to meet a threat that the Tau Empire has not yet prepared for; the defence of worlds within their growing domain from the counter-expansion forces of other races. Lacking the manoeuvrability of other battlesuits, the KX139 Ta’unar Supremacy Armour was designed for static defence, carrying massively destructive, long range weapons.

Armed with a pair of Tri-axis Ion Cannon and a Pulse Ordnance Multi-driver, this KX139 Ta’unar Supremacy Armour Battlesuit is ready to engage enemies at range and dominate the battlefield.

If you missed yesterdays leaked images from Forgeworld, here is the image that shows more is coming in the near future 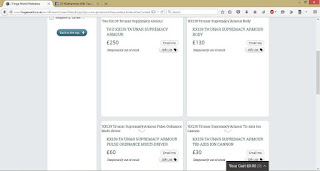