For people that use the Age of Sigmar app, Games Workshop Digital is releasing Battle Packs. These battle packs are a combined set of rules from the books to get all the rules into the Age of Sigmar app. Each Battle Pack has a mix of Warscroll Battalions and Battle Plans.  There are four released now, "Age of Sigmar" "Quest for Ghal Maraz", " Battletome: Dreadhold", and "Battletome: Stormcast Eternals". There will be a new battle pack every time a new book is released.


I don't use the app, so its hard for me to justify the extra expenses of these Battle Packs, especially if you just bought the book. So here is what the release information says about the new Battle Packs. These images are taken from Warhammer App. 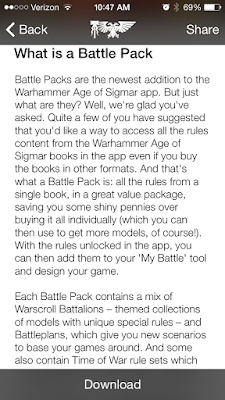 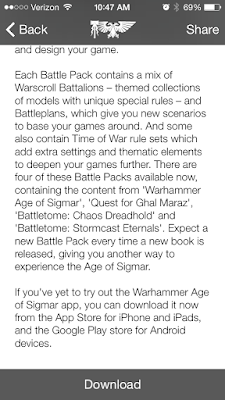