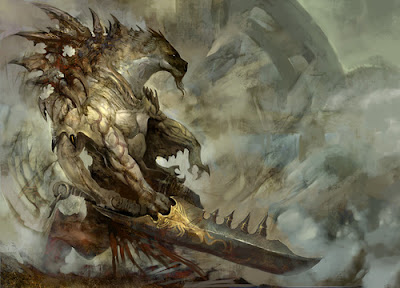 It's time to take on the End Game for the ruleset designed here on Faeit 212 that we have been discussing for the last week or so now. While the "End Game" generally is the last two rounds of positioning, getting to objectives, fighting for last kill points, etc, I wanted to take the end game beyond the fixed round system, or random game length. Added depth and reason for how an army keeps it's head in the fight, with opportunities to push the limits of the battle were the goals.


Fixed number of rounds games and random game lengths have always have a downfall in my mind. For fixed games it quickly turns the game into a positioning game in the round before the last so that you can jump onto the positions that you need to win. Tank shocking skimmers ring a bell? Other times random game lengths just seemed to kill the end of the game, and often cut it short right when the heroic and often most fun parts of the battle are taking place. 1 extra round of play in so many games, tournaments and casual, would of had the outcome changed 180 degrees.


So here is what is in this rule set.
Games end after 6 rounds of play, with the opportunity for either player to push the game further.

If either player wants to push the game past round 6, they may attempt to do so.
Roll a d6 and add in your highest leader's Command Attribute. d6 + Cmd vs Game Round
To play a round 7 the die roll must equal or beat a 7+
For round 8, the total must be a 8+ and so on.

The game automatically ends after 10 rounds.

This may seem like a long game, but we have completed 9 round games in less than 2 hours. So the game system itself can make or break a system like this, but I am confident that game play after a few games in this system is relatively quick at moderate point levels.

Tactically on the tabletop this makes it important to remove the leaders of an army from your opponent to limit their options towards the "end game". It also gives you some control on trying to get another round out of the game by preserving command on the field.

One of this last weekend's test games resulted in a 9 round game. The primary mission was tied in round 9, and I needed a final round, and a single inch more of movement, to claim victory in round 10. With no command left on the field, I failed horribly to continue the game, and the tie breaker in the primary mission went to the secondary mission of the game, which was kill points. I lost by 5 points.

It was not a large game, but it was my opponents first test game so he was learning the rules. We wrapped up that game in less than an hour. The End Game, was a tough fight that went back and forth several times as we both pushed hard towards the final objectives.