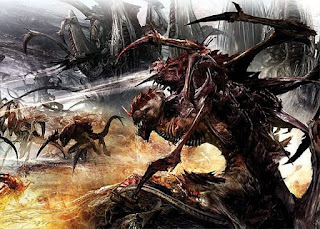 Today Reece had a bunch to say about Tyranids over on the Warhammer Community. Tyranids have been a problem army for years, and finally we arrive at 8th edition with some light at the end of that dark tunnel.

On the tabletop, Tyranids have had their ups and downs. Their most recent iteration has struggled to keep pace with some of the more powerful armies, and for many Tyranids players, the Winged Hive Tyrant with dual devourers has been the unit carrying all the weight of the faction on his back (its wings must be pretty tired!). I am here to tell you, that all of that changes in the new edition.

I’d be remiss if I didn’t start out with my all time favourite Tyranid unit: the Swarmlord. He is an absolute beast now, as he should be! With a Toughness value of 6, 12 Wounds, a 3+ save and a 5+ invulnerable save (increased to a 4+ invulnerable save in melee) he is not easily taken down. This can be further enhanced by casting Catalyst on him (and did I mention he’s a potent Psyker, too?) to give him a 5+ save vs Wounds suffered.

But it’s not just defence, oh no, Mr. Swarmlord brings the pain in combat as well. With a base of Strength of 8, 7 Attacks, hitting on a 2+, with an AP value of -3 and D6 damage a pop, the Swarmlord can lay low even Titanic units in a single round of combat. Truly a fearsome adversary.

However, his ability that I have found to be most useful is Hive Commander, which allows a friendly unit to move in the Shooting phase. This is incredibly powerful for the sudden added mobility. For Hormagants, with their blisteringly quick Movement of 8″, this means a potential 16″ move before attempting a charge. Or he could simply use it on himself and move up to 18″…

That’s just one combo out of dozens, too!

Genestealers, who are the iconic Tyranid unit in my eyes, are absolutely lethal. Not only are they incredibly fast with an 8″ Move themselves, they can also charge after advancing. With their shiny new 5+ invulnerable save, they’re also hardy, and I often cast Catalyst on them too, because I am a mean, mean man.

But to really crank the power up to 11 with Genestealers, take them in units of 10 or more to trigger their Flurry of Claws special rule, bumping them up to 4 Attacks each. Combo this with the Broodlord (who is also, utterly deadly in melee) to also give them a +1 to hit in the Fight phase. That means a full unit of 20 has 80 Attacks hitting on a 2+. With their Rending Claws – which bump up to AP -4 on a 6 to wound – very few units in the game can withstand a full strength Genestealer charge!

There’s so much to be happy about as a Tyranid player it is hard to cover it all. But we have a few more tidbits for you all before we close this article.

For one, due to the changes in the way damage works, medium sized Tyranids are much more enjoyable to play. A Tyranid Warrior with 3 Wounds and a Toughness value of 4 is so much more durable than he was, that it’s incredible. I’ve been using them as midfield Synapse providers who are both good with close range shooting and in melee.

And Synapse, hmm, what type of benefit does that provide? Nothing less than immunity to morale for friendly Tyranids units within range. Bring on the hordes of little gribblies!

And lastly, just because I can’t help myself: I think Pyrovores may be one of the most improved units in the new edition, and a unit of them in a Tyrannocyte has won me many a game!
5/21/2017
Natfka
8th Edition, Tyranids, Warhammer 40k