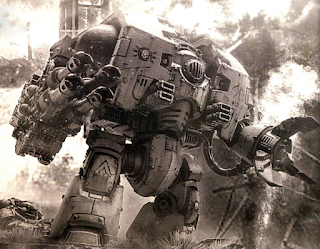 The new edition will include Forgeworld models for normal Warhammer 40k. Remember these discussions all those years ago? The integration looks rather complete, and I think its a massive new fun way to bring these models into the games.

Amidst the massive line-up of new releases due for pre-order on the 3rd of June were the Forge World Imperial Armour Index books for Space Marines and their traitorous counterparts.
We haven’t really talked about Forge World miniatures in the new Warhammer 40,000 yet, but now that the new books are confirmed, let’s take a look at a datasheet from one. 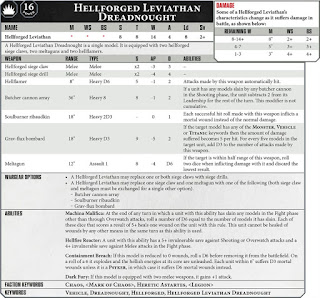 This guy is a Leviathan Dreadnought. And more than that, a Chaos one! The traitor’s look like they have opened up their 10,000-year-old vault of Legion Dreadnoughts for the new Warhammer 40,000. Against those new Primaris Space Marines, we’re sure Chaos players will appreciate the reinforcement.

Just a cursory glance at the stats on this guy, and we can see that he is an absolute monster! Some of the larger walkers, which previously fell a little short of super-heavy status in the last edition, do very well out of the new Warhammer 40,000 (Orks also do pretty well here).

Kitted out either for combat, shooting or a mix of both, this Dreadnought is going to wreck face. All of those weapons are looking like good options. There’s even a ranged weapon that kicks out mortal wounds – one of only a handful in the entire game. We think we’re veering towards a grav-flux bombard and hellforged siege drill as our favourite kit though. You budding Chaos Lords will have to decide for yourselves. 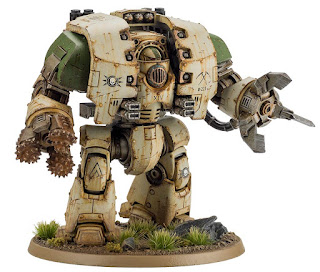 And that’s just one unit in one of the two Forge World Index books accompanying the launch of the new edition. And there will be more Index books on the way very soon after for other Forge World Imperial as well as xenos units.
5/24/2017
Natfka
8th Edition, Forgeworld, Warhammer 40k