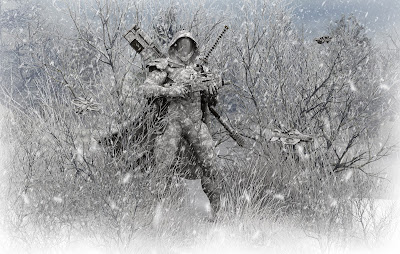 We are going to start talking about a few of the new changes to the rules this week, as well as getting a preview of powers and the Reptilia. So today I wanted to start off with a couple small, but well fitting rules changes that have occurred do to playtesting.


Please remember that these rules will be in the updates hitting later this week.

Charging
Just to recap for existing playtesters, and for those that are looking at the game; In Genesys you get a charging bonus based on how far you are moving. This is regardless if it is your player turn. This means that two squads running at each other towards the center of the table... both will get a charging bonus when they collide.

These are movement bonuses... and the same movement distances apply to your ranged target numbers as well, making it harder to hit you with ranged weapons.

Now the updates..... Everyone in Genesys knows that we have had Threat Ranges on Melee Weapons for a long time, and what was happening was that models were reaching the threat ranges on a charge, but not reaching base to base contact (which we call "Engaged Models"). So the new updates are that Charging bonuses only apply to models that reach base to base contact and are now engaged..

So here are the updates.... Sentry now has an X modifier, which allows models to have extended range on their Sentry ability. So yes, those Wardogs will notice you much easier now.

As far as infiltration goes.... The size of your model now effects your infiltration range, as well as if you are in or next to a piece of terrain. This can allow you get really close if your faction are small sneaky goblin type factions. However Giants  will have to really work harder, or need some good terrain to get close.