Finally we get a chance to see the Dark Eldar.... eh Drukhari for 8th Edition. There is a lot here, and I am digging through it to see how this might actually get the dust off my dark eldar models as they hit the tables once more.

Drukhari, also known as the Dark Eldar, are absolutely my favourite faction due to their background. They are like space pirates of the roughest sort mixed with a dash of maniacal arena combatants sprinkled with the bizarre and terrifying Haemonculus Covens. This forms a potent cocktail of evil which I’m sure we can all agree is awesome! They constantly fight amongst themselves for political power and to gain status by any means possible. When not stabbing one another in the back, they stage horrific raids into realspace for slaves and treasure. They must constantly seek ways to preserve their lifespans, as they do not have the protection of the infinity circuit used by their craftworld kin to shield their spirits from Slaanesh when they die.

Drukhari do not currently get a lot of attention on the top competitive tables. They can struggle to make it into close combat and often get cut down by overwatch before they get to swing. Their shooting, while potentially deadly, relies heavily on their Poisoned weapons which suffer against many armies. 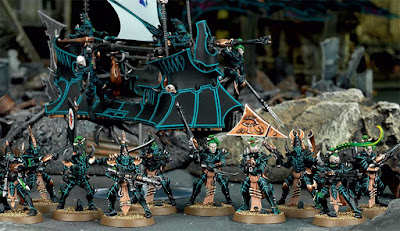 What I want is Raiders flying around with guys shooting poisoned needles out of the back. I want close combat units that are feared and some cool (hopefully extra dirty!) tricks I can use to gain (unfair) advantage during battle as is befitting of a low down dirty space pirate!

In the new Warhammer 40,000, Raiders are exactly what they should be. They are blisteringly fast, open topped transports that deliver warriors where you need them but remain a little fragile. Open Topped vehicles allow you to shoot out of them still, which is a massive benefit. You can even fire Pistol weapons out of the vehicle when it is engaged in close combat! However, Raiders are nowhere near the paper thin deathtraps they could be in the past. Venoms, as well, are absolutely fantastic vehicles, and due to the changes to the core rules of the game, all of their weapons now have at least a chance to hurt even resilient vehicles on a 6 to wound (representing that lucky hit through a vision slit, or punching through a weakened section of armour).

These vehicles are restored to glory, allowing you to zoom around the battlefield and get your troops into key positions. They are also armed with strong weapons beyond splinter cannons. You can have a dark lance, which will give you serious punch to open other people’s transports or take down large creatures with a strength of 8, an AP of -4 and D6 damage. Or you can go with the disintegrator cannon, which has three shots that all do 2 damage at AP -3.

With a toughness value and wounds, these vehicles are also much more durable. Lastly, these vehicles have a 5+ invulnerable save versus shooting attacks which will help when getting blasted by heavy weapons, and they ignore the -1 penalty to shooting heavy weapons after moving, keeping them agile. You can imagine how potent Ravagers will be with these rules!

What about some of those iconic melee units, such as Incubi? They are my absolute favourite unit in the entire Drukhari range, and they are now truly frightening combatants. They have a klaive that hits at +1 Strength and AP -3… yikes that’s going to hurt! The leader of a unit is a beast as well, gaining +2 damage if he rolls a 6 to wound. This unit will be dominating their Fight phases in the new Warhammer 40,000. When you pair them up with some of the characters for added bonuses, such as the man himself, Drazhar, you will have a devastating combo. I am happily painting more for my army, now! 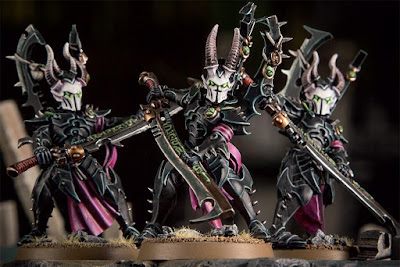 Wyches will be seen in greater numbers too. Honestly, this might be one of the top 3 most improved units in all of the new edition! They get the 4+ invulnerable save in the Fight phase, just like before, and can now dish out some damage in combat. Their hydra gauntlets and razorflails are fantastic, giving their attacks -1 AP. But their real talent is in the No Escape special rule.

When an enemy infantry unit in melee tries to Fall Back out of combat with Wyches, they can only do so if they win a roll-off with you. That is so incredibly powerful because it will protect your close combat units from getting shot and allows you to kill whatever you are locked in combat with. Units like the T’au Crisis Suits I was telling you about last time will no longer be able to simply leave combat and shoot you to bits! The Wyches have been a lot of fun to play with and will be accompanying my Incubi on the tabletop for a vicious one-two combo. 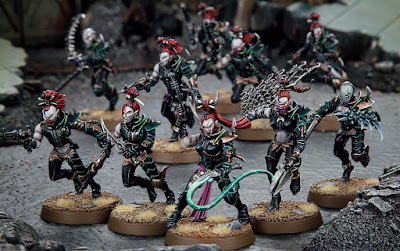 I hope all you Drukhari players are as excited to put your armies on the tables as I am. There are so many more exciting developments to talk about with this faction but so little time. I didn’t even get to touch on Haemonculus Covens! But all of that will come in time.