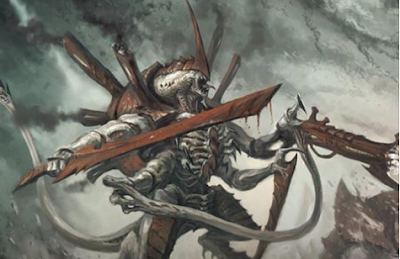 As we approach the new edition of Warhammer 40,000 its becoming more important to have a base line where we can get all the articles in on place without having to dig through to find them. Here is your coalation of 8th Edition information.


The article right after this will be for factions.

Overview of the QnA written out

New Space Marines Revealed: Primaris Space Marines + FAQ
Over the millennia, some have tried to emulate the process of creating Space Marines, both for good and evil, but none have managed to equal the genius of the Emperor’s finished creation.
Until today.

8th Edition Unit Profiles
One big change is vehicles. These now use the same profile system as everyone else. As you’ll see though, their stat lines are much above what you might expect from a standard infantry trooper. Wounds, for example, are not capped at 10,

8th Edition 40k Ranged Weapons
Damage is a big change. This stats effectively lets a single hit deliver multiple wounds to one model. So, as we can see, the bolter does a single would per hit, and so is optimised for shooting models that have a single wound themselves, whereas the lascannon,

8th Edition Movement and Fallbacks
In the new edition, every model has its own Movement characteristic. This means that, rather than every model moving 6″ unless specified otherwise – things like Terminators will advance slowly and inexorably,

40k 8th Edition Psychic Phase and Mortal Wounds
Each time you pick a psyker, you can cast as many spells as their datasheet states (which would previously be the same as their Mastery Level) and there’s a simpler, two-dice mechanic for casting, you just need to beat the warp charge value.

8th Edition Shooting Phase
we’ll be hitting on a fixed Ballistic Skill (a bit like you do now) and we’ve also seen a little about how weapons work – multiple damage from powerful weapons, and armour save modifiers, for example. Today, we look at some of the other rules of the phase.

8th Edition 40k: Charge
The basic mechanics of this phase are very similar to how they work now. You can select any unit within 12″ as the target of your charge, and your units will move towards them 2D6″.

8th Edition Close Combat
Following chargers, players take it in turns to activate units across the board to fight – this can get quite tactical, as both players need to choose the combats where dealing maximum damage will be important to them,

8th Edition Morale
The mechanics are simple – any units that suffered casualties in a turn must take a Morale test at the end of it. You just roll a D6, add the number of models from the unit that have been slain, and if the number is bigger than the unit’s Leadership, the unit loses the difference in additional models.

8th Edition 40k: Battle Forged Armies
In their place are a dozen new game-wide Detachments that are available to all factions. These are flexible enough that all of your current forces can be fit into them to form a Battle-forged army.

8th Edition Rules: Large Models
You’ll soon see that some of Warhammer 40,000’s biggest hitters have A LOT of Wounds, high Toughness and a good save. The biggest Tyranid monsters now have over a dozen wounds, where Imperial Knights have over 20!

So, you can see that while even the humble lasgun has a chance to take down the biggest foe, you’ll need a lot of small-arms fire to really threaten the big stuff.

8th Edition: Character Rules
So here’s a big thing – Characters can’t join units anymore. The age of the -star is over.Instead, you’ll tend to find that a lot of Characters will have an ability that affects nearby units with a certain Keyword within a radius of effect.

8th Edition Weapons Part 2
In the new Warhammer 40,000, twin-linked weapons instead get double the number of shots.

8th Edition Datasheets: Rubric Marines
universal special rules are out, and all the rules for a unit will appear on its datasheet. No more lugging a demi-library of books to every game night to ensure you have all the rules you need. Even the rules for weapons will be on there for the most common weapons the unit is likely to be equipped with

8th Edition: Points + Summoning Rules
In matched play, your points will be capped across the whole game. So if you’re planning to summon units to the battlefield, you will need to set points aside to do this.

Stratagems and Command Points
These represent your army’s commanders marshalling their forces and vital orders coming down from high command (that’s you!).

8th Edition: Tactical Reserves
There are some pretty fundamental changes to how they work though. For a start, not every unit can be placed in reserve, so most of your army will usually deploy on the battlefield at the start of the game.

In the current edition of Warhammer 40,000, the axe is the go-to weapon for a lot of folks. Players gladly took the unwieldy rule in exchange for AP2 and a bonus to Strength. Now, the obvious choice is far from obvious, as they clearly all have their uses.

8th Edition: Stronghold Assault
All across the 41st Millennium, there are fortresses, keeps, and strong points that hold vital strategic value. They inevitably become the scenes of battles, as attacking forces seek to wrestle control of these fortifications from entrenched defenders.

8th Edition Transports
Transports are almost universally, better: they are more durable, faster, many are better at shooting, and all have fewer limitations on the units disembarking from them.

Good Information from Rumors (as of now)

Updated...How Pistols Will Work in Close Combat!
A unit locked in a melee combat during their controlling player's shooting phase may fire the pistol into the enemy unit as a regular shooting attack, using the pistol's full profile.