Ultramar is the Warzone topic of the day, with the forces of Nurgle tasked to conquer it. We will definitely be getting a lot more information after today with the new Dark Imperium box set, as well as future releases... Hinting at a Death Guard release coming soon after the release of 8th edition.

The war zone we are going to talk about today, though, is particularly hard fought – a war zone that contains hundreds of planets, amongst them the home world of the Ultramarines and their Primarch.

The region of Ultramar is one of the largest jewels in the crown of the Imperium and was one of the few places in the galaxy that could be considered prosperous… but that jewel is about to lose its sparkle.

The new Warhammer 40,000 book looks at this war zone in some detail. Let’s have a little look at what it has to say:

“WAR ZONE: ULTRAMAR
Greedy eyes looked out from the roiling warp. They lingered long over the southern reaches of Ultima Segmentum. Nurgle wanted them for his own. He wished to lavish his gifts upon them, to watch their citizens sprout new growths and lament while other parts rotted and sloughed off.

The worlds of Ultramar were prosperous, well governed and aesthetically beautiful. It is no wonder that such a gem drew the eager eye of Nurgle. Wishing to annex those worlds directly into his own Garden in the Realm of Chaos, the Father of Plagues set his minions to the task. After the Great Rift tore reality and flooded warp energies into the galaxy, Nurgle deemed the time was ripe.

Where seeds of corruption had been planted, where the Plague That Walks, the Oozing Pox, and the Eyerot had decimated overcrowded hive worlds, there did Nurgle put forth his greatest efforts. As darkness closed over those worlds, new, virulent strains of those dreadful diseases started the cycle of death anew. This time, however, the cycle was completed, for there was life also. From the corpses of the fallen burst countless Nurglings. In the devastation that ensued, Cults of Corruption summoned further aid. The following battles – known by the Imperium as the Plague Wars – ended when three systems to the galactic north of Ultramar were corrupted and turned into the Scourge Stars. Calling upon three of his greatest commanders, Nurgle tasked them with next conquering Ultramar.” 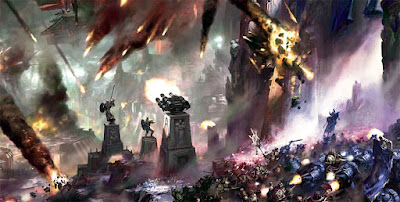 Well, things are looking pretty grim for the worlds of Ultramar. As if narrowly surviving a Tyranid hive fleet a few decades back and weathering a Black Legion invasion in the Gathering Storm weren’t bad enough…

As well as the background on the war zone though, we also get some maps of the region, seeing how the sub-empire of Ultramar and some of the 500 Worlds connect. 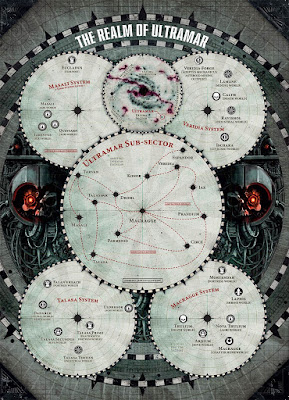 The story of the upcoming Dark Imperium box set is set in Ultramar (though battles like it are erupting all across the Imperium). The Ultramarines, of course, have been reinforced by the arrival of their Primaris Space Marine brothers and the return of their Primarch. The legions of Nurgle, though, are nothing if not tenacious, and with the Death Guard leading the way, will this latest, inexorable attack be the doom of Ultramar?