Love epic sieges, there are advanced rules to help represent these games, and GW is sharing a sneak peak at them.

All across the 41st Millennium, there are fortresses, keeps, and strong points that hold vital strategic value. They inevitably become the scenes of battles, as attacking forces seek to wrestle control of these fortifications from entrenched defenders.

Warhammer 40,000 history is full of epic sieges, heroic last stands against impossible odds, and the fall of great citadels: the defence of Helsreach, the Battle of the Fang, and of course, the siege of the Emperor’s Palace come to mind. These battles can often make for some of the most enjoyable and memorable cinematic games. 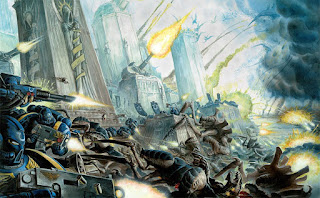 In the new Warhammer 40,000, there are advanced rules to help represent these types of games. These games are quite different from a standard game in a few regards: for a start, players take on opposing roles. In a matched play game, both players will be trying to achieve the same thing, but in Stronghold Assault, the defender is trying to hold his own territory against a numerically superior attacking force, so there are different objectives for each side. This is represented both in the way the battlefield is set up and with mission-special rules. There are new Stratagems for example, and they are different for attackers and defenders: 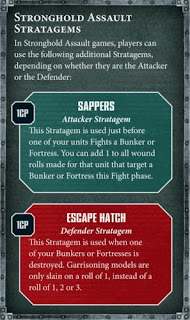 These Stratagems will be very handy, but you will have to spend those precious Command Points to use them, which means you’ll have fewer for re-rolls, counter offensives and insane bravery.

Stronghold Assault will also include rules for things like Demolitions, Strongpoint Defences and capturing (or destroying) buildings.

Speaking of buildings, these are a big part of Stronghold Assault too, and some, like the Fortress of Redemption, can also show up in other games of Warhammer 40,000 as part of a player’s army. These fortified structures use the same profile system as everyone else in Warhammer 40,000, though as you’d expect, they (usually) don’t move. Generally, dedicated battlefield structures will be Toughness 10, have over a dozen wounds and a 3+ save, so they take some considerable effort to completely destroy, as you might imagine! 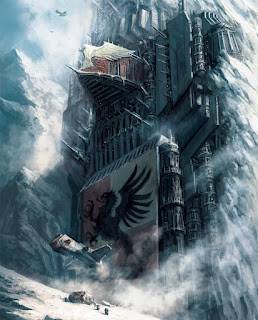 Games like these offer a really cool alternative to a standard game of Warhammer 40,000, especially if the narrative side of the setting appeals to you.