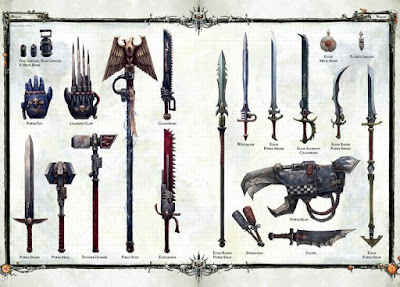 Finally we are getting some more information on Close Combat. There has been a lot of concern about shooting dominating the game, and while the boat is still out on this one, this gives us a little more insight. So far my biggest issue is still the randomness, especially with damage from weapons.

We’ve seen already that shooting weapons in the new Warhammer 40,000 use a Strength, AP, Damage system, and melee kit is much the same. The main differences being that there is no range on them, and a lot of them will use the user’s Strength as their basis.

Let’s look at some examples – we’ll start with the classic power weapon lineup.

In the current edition of Warhammer 40,000, the axe is the go-to weapon for a lot of folks. Players gladly took the unwieldy rule in exchange for AP2 and a bonus to Strength. Now, the obvious choice is far from obvious, as they clearly all have their uses. That sword, for example, is looking pretty deadly against most things, with the AP-3 helping it against every type of foe. Even with no bonus to Strength, using the new wounding chart shows that a Strength 4 Space Marine is wounding everything up to Toughness 7 on 5s (which is good,  because a lot of our models have swords).

Even the humble chainsword gets a boost. No longer just a standard combat weapon, the iconic combat weapon wielded by the Adeptus Astartes and many other forces, now gives its bearer more attacks in combat. Perfect for grinding through hordes of low armoured troops, the chainsword now functions on the battlefield how it always has in your head. This change also helps differentiate dedicated combat troops from those just wielding improvised or side-arm weapons.

We can see that all of the above still only do 1 Damage, meaning that while they can chip wounds off bigger stuff, they are primarily infantry killers.

What about some anti-armour stuff though? Check out the power fist:

At the cost of being more cumbersome to swing, it’s dishing out multiple damage with every hit, and at a Strength that will find it easy to wound anything in the game.

Another high damage option is Force weapons. Take a Grey Knight squad of any sort: every guy in there has a blade that, as well as having all the benefits of the equivalent Power weapon, also dishes out D3 damage on every wound! Those guys are going to be phenomenal up-close killers, as they should be.

D3 Damage is good, but if you really want to kill something, try the reaper chainsword. This deals a flat 6 Damage to whatever it wounds. That’s enough to carve a Chaos Lord in half, and a couple of hits will wreck most small and medium vehicles in a single Fight phase.