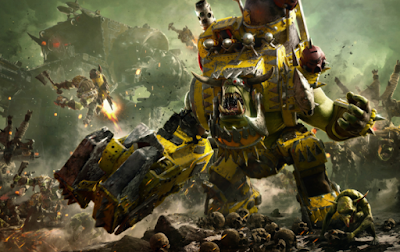 Ive found over the years here on Faeit 212 that Orks are probably one of the enthusiastic groups of players in the community, so today's Faction Focus should be a exciting one.

WAAAGH!! Are you ready to stomp and smash? Krump and loot? Well then ‘ere we go!

Orks are a tremendously fun faction to love in the Warhammer 40,000 universe. They bring a slight sense of levity to the grim darkness of endless war with their insane enthusiasm for battle and ability to thrive in a galaxy most factions are simply struggling to survive in – and all the while they remain ferociously menacing.

Orks have had their ups and downs on the tabletop over the years. They’ve often been seen as the army that was fun to play but that perhaps did not win too many games. Their most recent iteration in the current version of Warhammer 40,000 gives them quite a few tools and fun, themed army build options, but they have some weaknesses that can be difficult to overcome. Having nearly no invulnerable saves throughout their army but needing to get into melee to do the majority of their damage means they are at a massive disadvantage against armies with high durability. Units with lots of characters from different factions all providing bonuses to each other cause the most problems, and can leave Orks to be overwhelmed in close combat, where they’re meant to shine. As an Ork player, I certainly know this pain all too well.

In the new edition of Warhammer 40,000, this changes, and all I can say is praise be to Gork…or maybe Mork! One of the biggest changes for Orks is the way the new AP system impacts both their offence and defence. Units like Meganobz, who have a 2+ save (and now 3 Wounds!), will find themselves being able to soak hits from things that used to kill them in one shot and keep on killin’ thanks to the save they now get. A lascannon, for example, doesn’t bypass their armour entirely and they have decent odds of surviving, even if they fail their save. 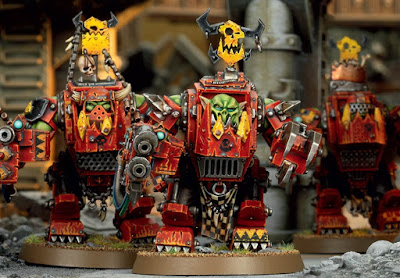 But what about the basic grunt in the Ork army, you may be asking? What about da Boyz? You so rarely see Ork Boyz on the table these days, and an Ork Nob, often swinging last in combat with nothing but a lowly 6+ save to protect him, was not exactly a feared opponent in a challenge.

Boyz will get their save against most light weapons now, as a 6+ is not ignored by so many weapons as it once was. Also, as there are no more challenges in melee, a Nob will no longer be forced to focus all his attention on smashing just one foe. Excitingly, it won’t always be a no-brainer choice to take a power klaw, either. The Big Choppa is now quite an appealing choice thanks to a more scalable AP system, and the kombi-skorcha is positively mean!

Morale is not nearly as problematic for Orks as it was, either. The Boyz have multiple layers of morale defence built into their army. The best way to mitigate it is by having a Warboss within 3″ of a unit of Orks; he can simply knock a few of them senseless (D3, to be exact) to keep the rest of the Boyz in line and in the fight. Nobz squads also help to keep Orks from leggin’ it by rolling a D6 for each nearby Ork that tries to flee, and on the result of a 6, they do not. These are all in addition to the Mob Rule! which allows a unit of Orks to use a leadership value equal to their unit size or the leadership value of a nearby Ork unit. These are great for keeping big mobs of Boyz in the fight!

But that’s not all, folks! Orks, you will find, are all about layering bonuses onto the Boyz for force multiplication. I’ve listed a few of them so far, but there are many more. A Painboy gives nearby Ork Infantry and Biker units a 6+ save against wounds suffered. A Big Mek with a Kustom Force Field gives nearby Ork units a 5+ invulnerable save against shooting attacks. And by the way, you can take BOTH of these saves! There are many more bonuses available to you, depending on how you build your army, but my favourite is the Warboss’s WAAAGH! ability, which allows friendly Ork units within 6″ to charge even if they advanced. Combine this with the ‘Ere We Go special rule that allows Orks to re-roll failed charge rolls and holy smokes, you’ve got a fighting force to be feared!

There’s so much more to discuss but alas, I am running out of space. Ork players should be pumped, as so much of that classic melee mob Orky playstyle now pays off. Blow the dust off of your Killa Kans and Gorkanauts and get ready for a WAAAGHly good time (sorry, I couldn’t help myself!).

One last little tidbit though, before I go: the Ork Weirdboy is a fantastic choice in the new edition, and one of his powers, Da Jump, is particularly awesome. It allows an Ork Infantry unit within 6″ of the Weirdboy to be teleported to any point more than 9″ away from enemy units on the battlefield (and remember, no more scattering!). This makes for quite the nasty surprise when a mob of 30 Ork Boyz appears behind enemy lines!