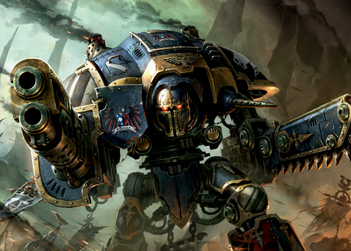 Imperial Knights are revealed today from the Warhammer Community, and they are looking good. With 24 wounds, Im starting to think though that some of the record keeping might get quite difficult.

The Questor Imperialis, or Imperial Knights, are Knights in more than just name. They live their lives by chivalric codes and pledge fealty to their High Kings and the Emperor. Through the Throne Mechanicum, these nobles bond with their mighty Knights and enter into battle for the honour of their household. 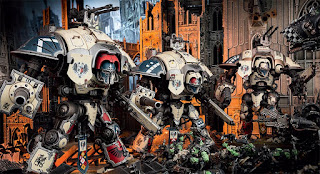 Imperial Knights currently play as an all or nothing army. What I mean by this is that they either totally overwhelm their opponent with high armour, powerful weapons and devastating melee… or they get crushed by an army that has the specific tools to deal with them. This is largely due to the game mechanics of the way Warhammer 40,000 plays. Many weapons cannot hurt a Knight at all, while some devastate them, such as Destroyer weapons or large numbers of melta weapons. This creates very swingy, often short, games that can leave one or both players feeling a bit flat.

In the new edition, this dynamic changes quite a bit. As everything can hurt everything else, a player in a game vs an Imperial Knight army will never feel entirely helpless. While firing a grot blaster at a Knight is highly unlikely to do anything, it just might. However, to compensate for this increased vulnerability, the Imperial Knights have been given a LOT of wounds. And by a lot, I mean 24! They’re also Toughness 8 with a 3+ save. They’re quite literally twice as durable as a Leman Russ which is itself a difficult unit to take down. Add in the inclusion of a 5+ invulnerable save against shooting – regardless of which direction the shots are fired from, thanks to their ion shield – and you’ve got a resoundingly resilient unit.

But it’s not all about defence. Imperial Knights pack absolutely blistering firepower, too. The thermal cannon is utterly lethal now. Heavy D3, Strength 9, Ap -4 and D6 Damage, rolling 2D6 and taking the highest when in half range, will leave many targets as nothing more than smoking craters with a single volley. If that weren’t enough, the cannon gets D6 shots vs units with 5 or more models. I think you can start to see how useful Command Points can be when using weapons like this, maximising the effect they can have at just the right time.

Another big change is how Stomps work. Previously, Stomps simply removed models entirely from the game on the roll of a 6. While this was useful for dealing with some problematic character-laden units which were hyper-durable, it could create gameplay situations which were not very satisfying for players when their favorite model was unceremoniously stomped into oblivion with no saves!

Now called Titanic Feet, these are still fearsome weapons, but do not simply remove models from play. And if kicking and stomping models isn’t enough, you’ve always got your trusty reaper chainsword or thunderstrike gauntlet to fall back on, both of which do an automatic 6 damage per successful attack. Ouch. The thunderstrike gauntlet also has the ability to chuck a destroyed Monster or Vehicle at another enemy unit within 9″ to do D3 mortal wounds on a 4+. Splat!

Knights will be a unit that cannot be ignored, and if you’re fighting against them, you will need to plan to deal with them when writing your list. While tough, they are not invincible and, in melee particularly, they can find themselves to be somewhat more vulnerable. The canny Knights general will need to be wary of enemy models with multiple D6 damage melee attacks such as Trygons, which can severely damage or destroy Knights in a single lucky round of combat. 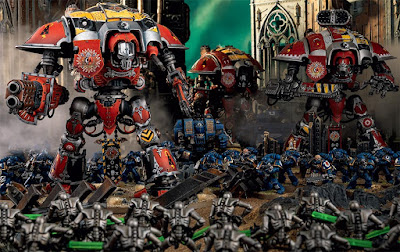 Knights players will also be happy to know they are no longer so easily bogged down by large cannon fodder units. In the new Warhammer 40,000, they can simply walk over Infantry models and leave combat while still being able to fire their weapons. They are fearsome units, indeed.

Though you don’t often see large numbers of Knights in a single army, those few are easily the match for many armies, and thanks to the new Super-Heavy Detachment, you’ll still be able to field them all on their own if that’s how you roll. 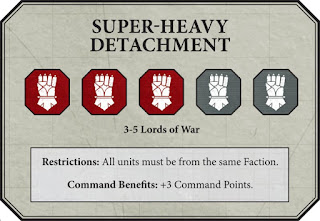 There’s a lot more to say about this army but for today, that is all we have time left for. We hope you are as excited to put your Knights on the table as we are!