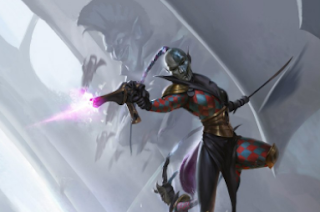 Today we have a little bit of insight into how pistols will work in close combat, answering some of the hard questions we have been wanting to get a hold of.

This is really a long time coming, as pistols have been really under utilized for what they should be. This is very exciting.

This is from a very solid source, but must remain as a rumor until we have an official release.

Please note that the source updated the information for clarity, those updates are attached below.

via Sources on Faeit 212
People are noting that Pistols no longer grant bonus attacks in close combat in 8th edition.

However: A unit locked in a melee combat during their controlling player's shooting phase may fire the pistol into the enemy unit as a regular shooting attack, using the pistol's full profile.

This means that weapons like Plasma Pistols do more than just offer "+1 attack" once the bearer is in CC.

The downside is that despite there being a close combat phase on both player turns, you only get one opportunity to shoot pistols on your own turn and not your opponents, thus somewhat lowering the overall number of attacks you're making.

The designer's felt that it was silly that a bolt pistol would make you swing your power axe more, and that people would grip whip with their artificer plasma pistol instead of unleashing the heat of a thousand sons at point blank -- The new system hits both birds with one stone.

Also note that many pistol weapons, and close combat weapon (defaulted as pairs or available to be paired) have additional special rules in close combat (much the same way that Chainswords do).

P.S. Wounds do not carry over, dealing 3 wounds to a 1-wound model removes only one model.  Wounds have to be allocated fully though before moving on, so dealing 4 wounds to two 3-wound models, would slay the first one chosen to be assigned wounds, and then carry 1 over into their ally.


Updated for clarity from the source
Some people have noted that my PS portion was unclear.

It should read: Dealing 1 wound, that results in 3 damage, to a 1-3 wound model would only remove a single model, and none of the extra damage carries over.


Dealing 4 independent wounds to a squad of multi-wound models would require a whole model to be killed before spillage.