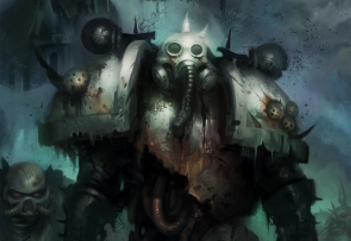 Death Guard is up today as the Faction Focus on the Warhammer Community. These guys will be in the new starter set this time around, so should become a norm to see around the tables now.

Death Guard are one of my favourite armies in the grim darkness of the far future, and the second army I ever owned. Blessed by father Nurgle with inhuman resistance to pain (and innumerable, horrific diseases, too!), these implacable warriors march through punishing damage as if it were no more than a gentle rain. 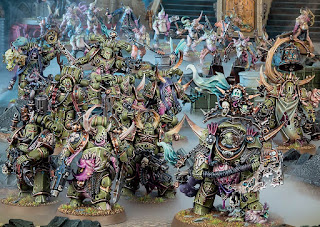 Death Guard in the current edition play to their background relatively well thanks to their high Toughness and having the Feel No Pain universal special rule. This is further backed up by Plague Marines being able to wound fleshy targets more easily with their poisoned blades. However, due to their high points cost in what we will soon be calling matched play, they aren’t actually seen on the tabletops in very high numbers.

First of all, they keep a pain-ignoring mechanic, which is now called Disgustingly Resilient, as we saw with Nurglings. The best thing about it is that you still get the save, even if you get hit with high Strength weapons that would have previously prevented you from getting a save due to the Instant Death rule. However, the fact that those high-Strength weapons usually do more than 1 Damage now, means you may need to take multiple Disgustingly Resilient rolls. Furthermore, in an all Death Guard Detachment, Plague Marines are Troops – which can help you unlock more Command Points with a Battalion detachment.

Plague Marines are still Toughness 5, which means a lot of attacks only wound them on 5s. Their plague knives now allow you to re-roll wound rolls of 1 in close combat, but I think the most exciting thing about the new Plague Marines, is their new weapon, the blight launcher – an Assault 2, Strength 6, AP -2 weapon that deals D3 damage at 24″ range. Plague Marines will be tearing enemies apart from a distance and in combat. Overall, a very dependable Troops choice.

Another unit to get excited about are Poxwalkers, the other Troops choice for the Death Guard. Coming in at 6 points in matched play with Disgustingly Resilient, they are a very solid pick. This unit also never has to take morale tests, which means you have to kill them to the last man (zombie?) which is not an easy task. Another cool rule they have is Curse of the Walking Pox, allowing you to add another Poxwalker to the unit every time they slay any enemy Infantry models. This unit is great for holding objectives or for screening your more valuable units from the hyper-fast assault units we’ve seen in armies like Tyranids. Also, if you’ve got Typhus on the table, he increases the Strength and Toughness of nearby Poxwalkers by 1 with his special ability, bolstering their already formidable durability!

The Death Guard also get Miasma of Pestilence – a psychic power which you cast onto one of your own units so that, until your next turn, your opponent must subtract 1 from all hit rolls that target that unit. This paired with the high Toughness of this faction and Disgustingly Resilient makes Death Guard units extraordinarily difficult to get rid of, just as you’d expect them to be.