Live QnA: The New Edition.. Updating as it Happens 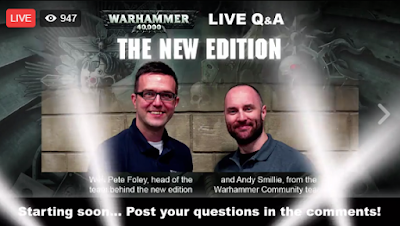 The New Edition Live QnA with Pete Foley and Any Smillie is going on now, and I am updating information as it happens.

Pete is the head of the team behind the new edition, and Andy is from the Warhammer Community Team.

Sorry for anything missed or errors. Typing while listening.

New Edition Warhammer 40,000 QnA
What is a primaris space marine?
new generation of space marines. Blended primarch, custodes, and space marine geneseed. Bigger more powerful, but more specialized when compared to tactical squads. The entire primaris squad is all trained in the weapons.

The new Crusade?
Guillimans new Crusade is to help distribute the new Primaris Marines, as well as turn back the tide of Chaos and Xenos.

Future...?.
The three ways to play will develop further as feedback comes in, with continuous playtesting and feedback.

Primaris Space Marines, the first batch was made on Mars, but the ability to create them was given to all the Chapters.

General feeling that shooting will be stronger than close combat. how will it work?
Close Combat is more damaging than before.
Pile in allows for more units to get caught in it.
A lot of special rules
Units are quicker now.
Consolidating into combat.
They believe that close combat will be just fine.

Close Combat Initiative?
Lash Whips,
Power Fists are just -1 to hit.
Lots of things that effect how combat is handled

How will psychic powers be selected?
You may select them or roll. Your option.

Perils of the Warp still there?
Yes.

Faction Specific Ways to build armies?
No. Battleforce selections are for all the armies, but there will be some tailoring for each army.
New specific stratagems, like taking down fortifications with Imperial Fists or hit and run with White Scars.

Will not be full drop pod armies in matched play. However you can in narrative play.

Transports can take multiple units. Each transport has a capacity and you can fill that how you want.

Grav Weapons are said not to be toned down, but everything else is toned up.

Wound allocation is back to the old method, where player gets to choose which ones are removed.

Can Primaris Marines be corrupted to Chaos...?
Who knows, we will have to wait and see.

Rules Wise, Tactical Marines are much more flexible on the tabletop, where Primaris Marines are very focused.

Will we see more Primarchs?
A cowled one may be on its way soon!!!!!!!
So there may be more on the way.