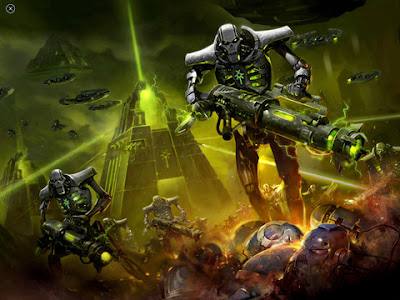 Necrons are up next from the Warhammer Community, even as leaks keep revealing more and more the game.

Necrons are one of the most resilient armies in the current edition, thanks to their Reanimation Protocols, and in games today, Necrons are known for having giant Canoptek Spyders spawning hordes of little scarabs to overwhelm their opponents. It is also common to see large numbers of Canoptek Wraiths and Tomb Blades, which are extremely fast, resilient and hit like a ton of bricks. But how do these ancient metallic monsters fare in the new Warhammer 40,000? 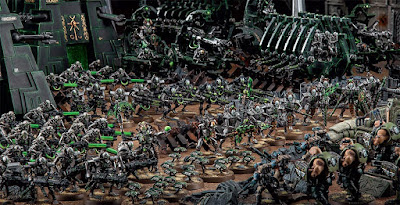 We should start with the most iconic Necron rule: Reanimation Protocols. This rule changes from a save to a roll to bring the model back to life each turn. When a Necron model with this rule dies, you keep track of how many in the unit have gone down. You will then be able to place models back into their units every turn on the roll of a 5+ per model lost. The models must be placed in unit coherency with the unit it came from. This rule is so powerful because it happens at the beginning of EACH of your turns. I want to say this again for emphasis: you roll for each downed model with this rule at the beginning of every turn unless the unit has been wiped out. So, if a Necron Warrior is killed in turn 1, you’d roll to bring him back turn 2, 3, 4, etc. until he either reanimates or the rest of the unit is destroyed. Wow. Necrons are seriously hard to keep down!

Illuminor Szeras, who is a bulked up Cryptek, can help boost this ability. Like all Crypteks, Szeras allows Necron units within 3” of him to add +1 to their Reanimation Protocols rolls. He can also improve a unit of Warriors or Immortals every turn by giving them either +1 Ballistic Skill, +1 Strength, or +1 Toughness, which lasts for the rest of the game (although a unit may only receive this bonus once per game), which turns those units into something to fear. Illuminor is a solid choice for any Necron army and will be seen leading many forces to battle.

Anrakyr the Traveller is a Necron Character who can also provide bonuses to Necron Infantry by giving +1 Attack to units within 3” of him. But I think his best ability is My Will Be Done, which allows him to give a friendly Infantry unit +1 to hit, advance and charge. These bonuses can combine to make Necron Infantry very scary and play exactly how I would expect them to based on their background. Prepare to see legions of large units advancing in a phalanx, taking everything the enemy can throw at them and dishing it right back. 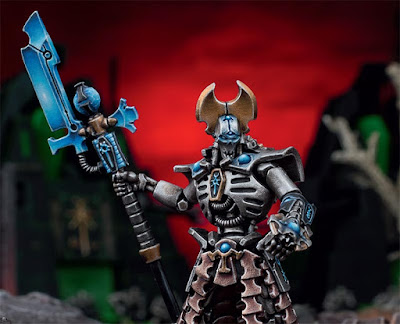 Next up, we have the Heavy Destroyers, who will tear through a vehicle without breaking a sweat (or oil, or whatever they leak?). These ignore the penalty for moving and shooting heavy weapons, which makes their Strength 9, AP -4, D6 Damage weapon especially lethal due to its mobility. They get to re-roll 1’s to hit, which makes them extremely deadly when paired up with a Character like Anrakyr.

Lastly, we have the iconic Necron Warrior. These are now one of the strongest Troop units in the game with their Strength 4, AP -1 Rapid Fire guns. When let to battle by the various Necron Characters, these guys will last longer and bring even the strongest warriors to their knees. I often find myself running 60+ Necron Warriors in my list. With the maximum unit size set at 20, full units are the hardest to deny their Reanimation Protocol rolls. Backed with some of the more elite Infantry units, such as Immortals (whose standard gauss blaster is AP -2!) you have a short ranged and somewhat slow, but utterly vicious army.

Just be mindful of protecting your all important Characters, as they are what really makes the army hum. Luckily for you, nearly all Necron Characters (who are already pretty dang tough) have the Living Metal rule that allows them to heal a wound every turn.

And just because you’ve all been waiting patiently for millions of years, have a Monolith datasheet: 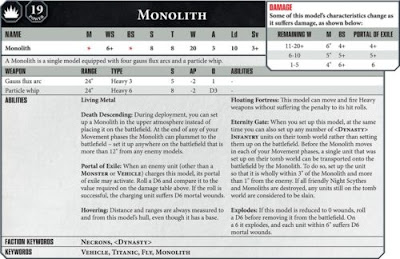 Which dynasty of Necrons will you conquer the galaxy with? I hope all of you long time Necron players are as excited as I am for these changes and the new Warhammer 40,000.