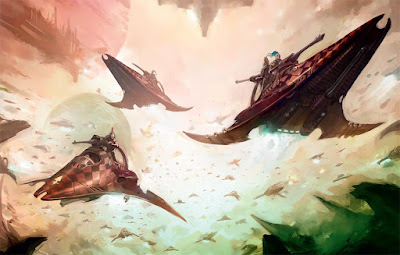 Today finally we get vehicles information for the new edition of Warhammer 40,000. Very exciting fo me, since I tend to always have lots and lots of vehicles for any army I play. So yes, I am the one fielding 10 rhinos, 10 Razorbacks, 12 DE Raiders, 11 Chimeras or any other combination of vehicles I own.

The best way to show you some of the changes is with an example. Because we haven’t really seen anything from the Necron dynasties yet, we’re going to look at the Annihilation Barge, staple fire-support gun platform of the undying legions:

So this thing looks VERY different in the new Warhammer 40,000.

Also, it’s got Attacks and Strength! So it can fight (albeit inexpertly) in combat. This represents it literally ramming or smashing into enemy units.

Some dedicated combat vehicles (commonly what used to be Walkers), will have melee weapons too, like the classic Dreadnought power fist, but most vehicles will need to make do with crushing enemies under tracks or crumpling them beneath anti-gravitic engines. Generally, these attacks will have a poor to hit roll (5+ or 6+) but high strength – because if a Land Raider runs you over, you’ll feel it. There are exceptions of course – Ork vehicles can be kitted out with some pretty deadly close combat options, which now function just like any other specialist close combat weapon: get hit by a Deathroller, for example, and prepare to be a pancake. 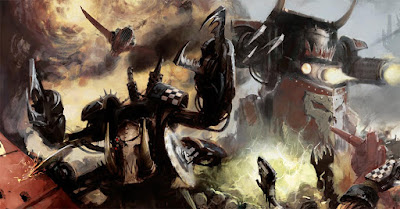 Vehicles will be affected by all the other new rules we’ve talked about too, so they will be able to move as any other model would, including advancing. They shoot just like everyone else does, including (with a few exceptions) -1 to hit with heavy weapons if they move. They can even charge! which effectively replaces the Tank Shock rules, except ANY vehicle can do it and they then fight just like any other unit in the Fight phase.

Generally, you’ll find that vehicles still fill the same roles in your army as they always have, but without so many exceptions to the core rules of the game. You’ll find them to be very durable, probably more so than they are today, and best used in coordination with infantry and where their own specializations can be used to full effect.