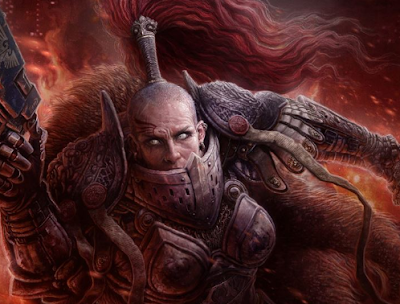 Here are some rumors that will need a little extra salt right now, at least until we can get additional information. The Black Crusade will reach Terra, and the Legio Custodes and Sisters of Silence will be there in it's defense.


Even according to the source, please add some extra salt to this one, at least for now.

via anonymous sources on Faeit 212
The Horus Heresy Legion Forge World Space Marine Icon bearer will be available at every Warhammer and Games Workshop starting on October 22.

also.....
Heard from an insider but unable to verify yet with a second source, but taken in context of the rumors of 40k End Times, Games Workshop taking over a lot of the HH, and plastic primarchs, this makes a bit of sense.:

By the end(ish) of 2016, the Black Crusade will make it to Terra. As the forces of chaos arrive, the Legio Custodes is forced out to defend the Imperial Palace. And, surprise: the Silent Sisters have been there the whole time. So that's where you get the introduction of the next 30k box set models into the 40k universe. Also probably means no more Sisters of Battle, although there may be one or two surprise one-off models.

Anyway, to sum up:
1. Black Crusade reaches Terra, forcing the Custodes and Sisters of Silence into the fray (rumor somewhat supported by GW taking on more 30k, Custodes/SoS included in new Box, and the recent kick off of 13th Black Crusade)

There's also some extra-salty soup regarding the return of Eldrad re: Slaneesh, but may we've already had enough sodium today.


Additional intel
By the way, additional but super salty (only heard from one second hand source but he's a former employer), is that by landing the Black Crusade on Terra, that's where we're going to get a whole slew of Primarchs returning from the webway/waking up from stasis, and the emergence of the demon primarchs, and the potential death and rebirth of the Emperor. So, basically, 40k endtimes, no word on if 8th edition would involve a major rules overhaul.

Having said that, this is basically salt soup at this point until I can get some confirmation kind of confirmation from another GW connection. If you hear something similar from someone else in the meantime, you're probably getting good intel at that point.
10/04/2016
Natfka
40k, 7th Edition, News Headlines, Sisters of Battle, Warhammer 40k