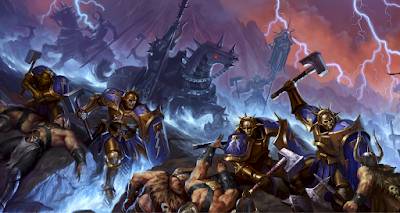 Some additional teasers for the Generals Handbook for the Age of Sigmar.


There is also an image from this as well.

via sources on War of Sigmar
https://war-of-sigmar.herokuapp.com/bloggings/900
Small teaser for all of you.

I have confirmed that summoning works as I said yesterday. You pay points only for bringing new units to battlefield so undead are safe with their standards returning models previously slain in battle.

Rules like phoenix returning on a 4+ work as written, you dont pay summon points for bringing it back to life, its part of model cost you pay at the start.