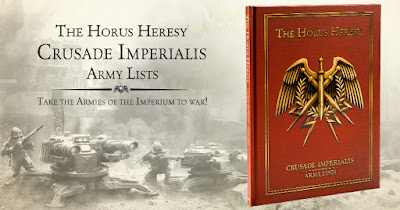 New from Forgeworld this morning updates the Solar Auxilia Army List, Questoris Knights, and the Imperalis Militia and Cults.

In this 132 page hard back book you'll find the unit profiles, characters and special rules for these three armies originally published in The Horus Heresy Book Four: Conquest, and Book Five: Tempest, each fully revised and updated. You will also find the Battles in the Age of Darkness expansion rules, allowing you to play games of Warhammer 40,000 set in the cataclysmic battles of The Horus Heresy.

With this book you can field the elite troops of the Imperial Army, second only to the Legiones Astartes themselves, The Solar Auxilia; the towering war machines of the Questoris Knights, each of which can also be added to other Loyalist or Traitor armies as Lords of War; and the endlessly varied armies of the Imperialis Militia and Cults, whose versatile Provenances of War rules can be combined to create countless armies – from a cyber-augmented warrior elite with advanced training and technology, to a feral mutant horde marked by the warp itself.

The Horus Heresy - Crusade Imperialis: Army Lists is an expansion to Warhammer 40,000. You will need a copy of the Warhammer 40,000 rulebook in order to use this book.
6/17/2016
Natfka
Forgeworld, Gaming News, Horus Heresy, New Releases, News Headlines