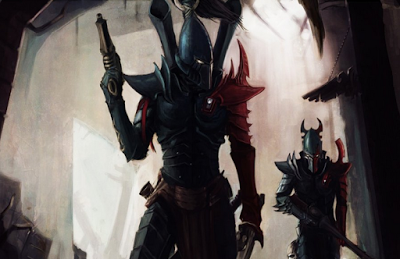 The Paths of the Eldar was the big hint for this week, and we have been eyeing a few select items like the Eldar Sketchbook. For now though, we have a little intel from Lady Atia on two Start Collecting sets coming.


via Lady Atia on War of Sigmar
https://war-of-sigmar.herokuapp.com/bloggings/878
This week we have:
- Start Collecting! Dark Eldar (Archon, 3 Reavers, 10 Warriors and a Raider)
- Start Collecting! Eldar (Farseer on Jetbike, 3 normal Jetbikes and a Fireprism)