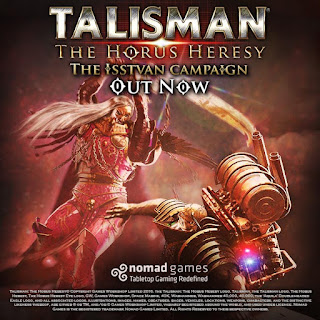 Nomad Games today has launched their next update for Talisman the Horus Heresy. This includes a lot of new characters, with new Stratagems, places and events to explore during your games of Talisman. Also, a new Season Pass option for players is released, which includes all the character packs, Isstvan Campaign, and the Shadow Campaign which is yet to be released.

Season Pass that nets all current and future content
http://nomadgames.co.uk/talismanhh_seasonpass/


via Nomad Games
“It is the beginning of the Horus Heresy. Brother shall turn upon brother on the black sands of the Isstvan System…”

Today, Nomad Games is thrilled to launch the Isstvan Campaign expansion for Talisman: The Horus Heresy on all platforms (PC, iOS, and Android). The Isstvan Campaign expansion allows the player to explore the events of The Horus Heresy around the Isstvan System in more detail and play as the Warlords and Legions that fought there. The Expansion has 7 new playable Warlords.  Each one also comes with their custom Legion Dataslate.

For the Traitors:
Fulgrim, the Phoenician, Prefector of Chemos and High Lord of the Emperor's Children.
Perturabo: The Lord of Iron, Primarch of the Iron Warriors is a grim warrior and a master of technological arcarna.
Armillus Dynat, the Harrowmaster of the Alpha Legion

For the Loyalists:
Ferrus Manus, the Gorgon, Master of the Iron Hands.
Nathaniel Garro, Hand of the Sigillite, former Battle-Captain of the Death Guard 7th Battle Company.
Saul Tarvitz, One of the few loyalist Company Captains of the Emperor's Children Legion.

And lastly, both Loyalist and Traitor may also play as a Chaplain, an inspiring leader of any of the 18 Legions.  The Campaign also includes new Stratagems, brand new Places, Strangers and Events for the player to explore on the game board.

“Isstvan is a really thrilling period in the 31st Millennium.” said MD Don Whiteford. “This is a chance for all fans of Warhammer 40,000 to see where it all started and take control of some of the most brutal leaders in either faction. We can’t wait to see what our players think of the new additions and changes we’ve made to the game with this update.”

In celebration of the Isstvan Campaign expansion, which launches today, the Steam (PC) edition of Talisman: The Horus Heresy is also getting a Season Pass content bundle ($14.99). This includes the Isstvan Campaign expansion, the 2 previously released character packs as well as 2 more character packs and the Shadow Crusade expansion yet to be released. The Season Pass will not be available on mobile.