Daemonic Magnus is No Myth 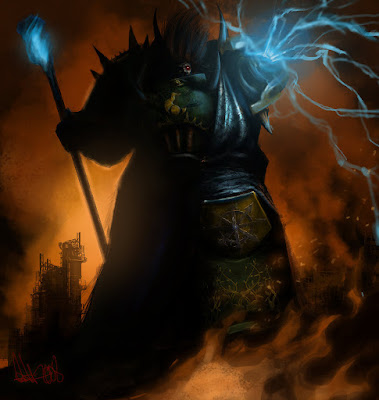 Magnus the Red is coming soon, along with other Daemon Primarchs. There is a lot coming soon, and Warhammer 40k will be getting lots of attention over the next several months. Patience.... and we will get all the intel we can get.


Thanks again Mauler for starting off this conversation everywhere (literally)
http://natfka.blogspot.com/2016/06/warzone-fenris-campaign-part-2-thousand.html

Sad Panda on Dakka Awesome Sad Panda... Thanks for the confirmations
http://www.dakkadakka.com/dakkaforum/posts/list/30/693338.page#8705311
What IF we aren't getting 40K Thousand Sons, but we are getting 30K Thousand Sons?
Both.

Myth no more.
Remember it is still a few months out, especially the 40K stuff.
There are a lot of things in the pipeline before it. Deathwatch for example.

via Squiggly on Faeit 212
There is an element of truth to this one.. The FW and GW studio's were considering doing the Daemon Primarchs in plastic rather than resin, purely because of the nature of plastic. But I don't think/didn't know anything this was far done if this is accurate.

I'm not saying this is right/wrong. I heard we might get plastic ones, buy no ideas when, or even if, we will see them.


via Lady Atia on War of Sigmar and comments here on Faeit 212
Confirmation and very much the nail in the coffin of this being just a rumor.
https://war-of-sigmar.herokuapp.com/bloggings/873
Ok, to stop this discussion (hopefully).
There. Will. Be. GW. Plastic. Daemon. Primarchs.
They will use them for their 40k storyline. You can also use them in 30k.


She sums it all up nicely here
- Forgeworld will do the Prospero Magnus. In resin. Around Fall, for the Inferno release (as I think Russ may be ready for sale for the next Open Day). There are no "problems", Simon Egan just was afraid of both the horns on his chest and his face. He will be the largest Primarch. And of course FW will continue to produce the 30k Primarchs.

- GW will use the Daemon Primarchs for their ongoing storyline. Because that's the things that "are more interesting". You can use them for both 30k and 40k games, more people buy plastic models than resin. Magnus is finished. But please don't expect all 5/6 Daemon Primarchs tomorrow lol.

- GW already did them (Angron, Mortarion, Magnus and Fulgrim) in EPIC. They all work as large focus models for their respective Cults.

- I wouldn't expect this stuff before the Summer is over. Relax, enjoy your Sylvaneth and play some games using your Handbook.