New from Games Workshop this weekend are the Stormcloud Attack box sets with dualing flyers. There are three of them plus a new Start Collecting Box Set, Blood Angels. 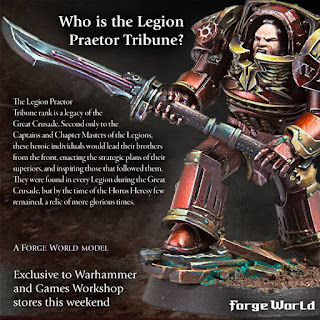 EXCLUSIVELY IN STORE! This weekend, Saturday 25th and Sunday 26th June, make sure you get down to your local Games Workshop or Warhammer Store. For the first time ever there’ll be a Forge World model on sale EXCLUSIVELY in stores. It’ll only be available for the weekend, and only in store, so don’t miss out!

Legion Preator Tribunes are a legacy of the last years of the Great Crusade, ranked above Consuls and Centurions but not yet amongst the elite of the Legion. They are battlefield commanders, charged with leading entire chapters of their Legion and enacting the plans of more experienced captains.

Equipped with a master-crafted paragon blade and wearing advanced Tartaros pattern Terminator Armour, this Legion Praetor Tribune is a highly detailed resin model. You’ll find rules for including him in any Space Marine Legion army in Horus Heresy games in the box.

This model is only available at Games workshop and Warhammer stores, and one they’re gone they’re gone. Click here to find you nearest store, and get your Legion Preator Tribune this weekend!