The Amazing Game of Tanks 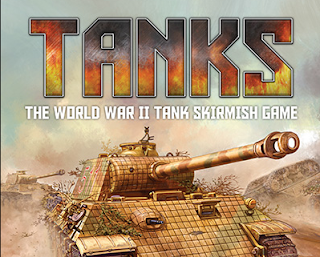 Guest Article from HERO
Hi, I'm back from the realm of video games and I'm here with some really exciting news.

Story time: A few years ago I had this deep desire to play Flames of War because of my love of WWII history. As a big fan and player of the CoH1/2 franchise, I started dabbling in FoW and to my surprise, I found out that it was more historical in the sense that I couldn't just pick a faction and build the army that I wanted, with the heroes that I wanted. That's when I had a thought that I think it would really amazing to have a skirmish game based around WWII tank battles with a ruleset similar to X-Wing. Fast forward a little more and it looks like my prayers have been answered.


I want to tell you now about this miniatures game called TANKS that I've been fiending over. Over the last couple of days, I've been seriously deep diving into the game mechanics and rules and ripping it apart in the only way I know how. Like I said before, I've been waiting for a game like this for a long time and this seems too good to be real. I've been involved heavily into game design before, and I agree with a lot that's being advertised with this fast-to-play, skirmish-level game that's both intuitive and fun to play. The only downside in my opinion, and this is more of an entitlement issue, is that the miniatures do not come pre-painted. That's right, you have to actually build the tanks yourself, just like all those other non-FFG miniatures games.

Let me tell you what I like about this game, aside from the fact that it's set in WWII and it's all about skirmish-level tank battles.

For one, the game has less than 24 pages of rules. By 24, I mean it actually has something like 14 rules of actual rules and missions and the rest is stuff about history, background and assembly instructions. I absolutely love the fact that it uses the D6 dice system and have a simple to use measuring stick for determining movement. This appeals to me for a large number of reasons, but the number one reason is accessibility and familiarity. Players will instantly be more accustomed to dice rolls of 4+ in addition to having a measuring tool that uses free-form placement rather than maneuvering tools.

Another thing that I like about the game is the emphasis on terrain and line of sight. When it comes to shooting and line of sight in the game, the scale of the game means that as long as you're on the 3x3 battlefield, you can shoot anywhere you want. Yes, that means for the first time that I can think of, you don't need to measure for range when it comes to shooting. This is a huge boon when it comes to rules and simplicity; eliminating a crucial area of debate among players so they can focus on other areas of the game.

The biggest thing that I enjoy with having a fluid movement system and line of sight is that players can intentionally use terrain to their advantage. Whether this is to add a defensive bonus through cover or to block off line of sight to a tank entirely. This allows you to play maps very differently depending on how terrain is arranged, and give players another layer of strategic play from start to finish. The best part about this is that placement of tanks on the battlefield, regardless of they are fighting or destroyed can add to the overall level of strategy as the game carries on. For example, tanks that are destroyed in battle can form a line of sight blocker that other tanks can gain cover behind and use to their advantage.

Now, let's get to my favorite part: The combat mechanics. Combat in this game is dead simple, but very clean. It reminds me a lot like the design in X-Wing which is probably why I like it so much. There's Initiative which works about the same as Pilot Skill, in that the lower Initiative tanks move first, but shoot last. The next value is Attack, which is simply how damaging the tank's primary weapon is for the most part. If you have an Attack value of 5, you throw out 5 D6s and 4+ count as Hits and 6s are Criticals. Your opponent then rolls his Defense die, which is basically his armor value plus any additional defensive measures (more on this later), and on a 4+ he negates some of the damage. If the defending player roll rolls a 6 on the defense roll, he can pick one of the attacker's dice to cancel, so he can potentially get rid of one of those pesky Critical Hits that was scored. When it comes to defense die, I think they did something really elegant here. For example, if the attacking tank moved twice and the defending tank moved once, the defending tank can add +3 dice to his Defense roll. This is calculated from the fantasy that the attacking tank is moving so rapidly that its shot is most likely inaccurate, and the defending tank is more difficult to hit because it also moved. So if the tank already had a Defense rating of 2 because it's a Panther tank, it now rolls 5 dice for defense against the attack from that particular attacking tank. What they did here was to represent weapon accuracy vs. the difficulty of hitting a moving target.


You can see more details on the rules over on HERO's Gaming Blog
http://lkhero.blogspot.com/2016/06/tanks-this-game-looks-amazing.html

What can I say? I like the game, and I like it a lot. Despite the simple rules, there is a lot of hidden complexity in the game that I think will make the game exceptionally difficult to master. This is one of the things I look for most in any game; and that's how simple design can promote truly deep gameplay. I can't wait to see what the tournament rules for this is going to look like.