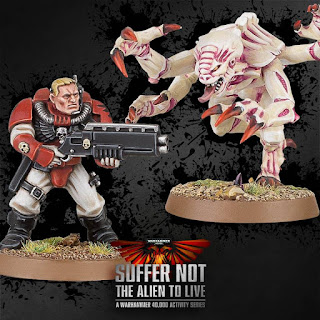 "Suffer not the Alien to Live" is a Warhammer 40,000 Activity Series according to the poster above. What is interesting is that this is not just about Lost Patrol, which went up for pre-orders yesterday. According to the latest, its a summer series, possibly a campaign that will last into September culminating in the release of the Deathwatch themed events. This provides the setting for the release of Codex Deathwatch at the end of August and the release of Deathwatch Overkills miniatures individually or in packs outside the board game.


Good times are ahead.

Yesterdays news bit about Deathwatch!
via anonymous sources on Faeit 212
http://natfka.blogspot.com/2016/06/codex-deathwatch.html
The Deathwatch Codex is on its way at the end of August :)
Cheers


New Information
via anonymous (separate from the intel above) sources on Faeit 212
to chime in:
the "Suffer not the Alien to live" campaigne that kicked off this
weekend will last through sept. and will end with the deathwatch release
and deathwatch themed activities

GW is really putting A LOT of effort to bring acitivities to their
stores for both Systems, expect a lot of cool stuff during summer.

via Games Workshop
https://www.facebook.com/Warhammer-40000-1575682476085719
A new series of Warhammer 40,000 activities starts today in Games Workshop and Warhammer stores across the world.
This week the theme is assembling and painting Genestealers and Space Marine Scouts.


There'll be painting competitions, building workshops and more. Get in touch with your local store and find out how you can get involved.
6/12/2016
Natfka
40k, 7th Edition, Rumors, Space Marines, Tyranids, Warhammer 40k