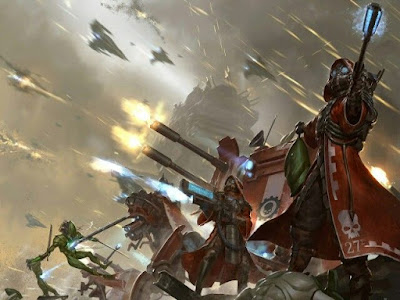 There is a lot of cool stuff in this one, and I have to say this is probably the most exciting rumor bit I have read in a bit..... New Admech Book, combining the previous two, with some new additions!!!!! Mentioned are two more types of robots and a new flyer! OK, Im excited.


This also appears very logical, as the most recent starter set people have been wondering about why the dual start collecting set with the Tech-Priest Dominus in a Skitarii box set. Time that with an IA release this year, and I think we have a winner. Best News All Year! (yea I know it's just started, but this is exciting)

Also some interest in Chaos Space Marines.... Squiggly posted this up in the No Chaos Space Marine until summer 2017 article. He basically confirms no codex this year for CSM's. However, some Tzeentch goodness is perhaps hinted at here?

Just to note, Squiggly has been very accurate since his appearance here. A huge thanks to him for his insight.


via Squiggly on Faeit 212
(about CSM not Getting a Codex Release until 2017)
This is true I'm sad to say. We will see some chaos stuff for both game systems this year though. Mostly of the blue variety.

New admech book. Basically the two seperate codexes rolled into the big book with some new additions. The new additions are basically just leftovers from the last release that never got put into production. There was concept work done on two more types of battle robots and a new flyer of some sorts. That Enginseer from the Leman Russ bundle should also be getting a seperate release.