Updated.. and Corrected... as Wildly off Rumors 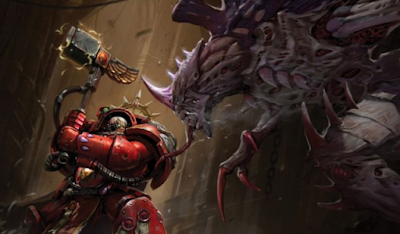 These rumors have been said to be incorrect by trusted sources.

This just came in and it has a list of many of the new rules, a sort of overview of many things that we have been dying to know.

I don't know how solid this source is, but this was sent in to us with the intention to end some of the speculation that has been going on with the new edition of 40k. I suppose we will find out how accurate this is over the next few days or so. This was sent to me on Sunday, so anything recently released through the Warhammer Community can be checked against this for accuracy.

So please use some salt, and we will see how these turn out.


Please note that a valued source has confirmed that these are wildly off. Here is from a source we can trust about the rumors below
Some items are kinda correct due to the poster grabbing gw shares and sigmar rules, and basically throwing spaghetti at the wall. But most is either incomplete, somewhat off, or wildly off.

via Sources on Faeit 212
- Assault 2d6”, multiple units
- Split fire: any unit can target as many targets as they want
- Normally the unit don’t have to target the nearest unit, but there are lots of abilities that have this restriction
- Invulnerable saves simply ignore armour penetration up to the given value. They are not that common, wave serpents and Canoptek wraiths have one
- Most power fields, etc. are separate saves that are taken in addition to other saves just like FnP of today, they may or may not ignore mortal wounds on a case by case basis
- Dodges, camos, etc are now to hit modifiers
- Characters cannot join units
- Characters can only be targeted if nearest target or within 12”
- Larger models are seldom characters, Gulliman is not for example
- Deepstriking units can be placed anywhere. Every unit with deep strike has a value. Have to beat it to land on target, otherwise opposing player can move unit the rolled distance
- There are no mishaps anymore
- Overwatch shooting against deep striking units within 9” at -1 BS
- Summoning is not a psychic ability anymore, normal deep striking with psyker as homing beacon instead
- There are spells that replenish or add wounds to demon squads
- Most vehicles have a single attack with high S, but no AP, some have considerably more like the battle waggon
- Vehicles and units fighting against vehicles usually can fall back without penalty, they cannot move in the charge phase when they have moved or shot in the same turn. Most walkers don’t have this rule
- Terrain enhances armour in assault phase for the defender, or both in consecutive turns, is negated by grenades
- Assaulting units get +1 attack
- Vertical movement does not count against the allowance but a model cannot go higher than the movement value in a given phase. Lots of exceptions for jumping, flying, etc. of course
Ranges are measured on the ground level from base or model to base or model, whichever is nearer
- Units are deployed within 3” of a transport, cannot move, but can charge in the charge phase
- No more firing from a transport, though some vehicles, especially open topped ones have extra firing points weapons if they transport enough (and sometimes eligible) models. But they use their own BS and the kind of weapon is fixed. For example Raiders have 5 fire point splinter rifles, but only if they transport kabalite warriors
- No challenges
- Hidden power fists viable again, wound allocation by owning player, any model in squad, but wounded ones first
- There are some precision weapons that let the firing player choose the wound allocation (always or on a 6)
- Units have always the same T and Save now. There are some models that have T- Sv - and adapt like drones and grots, most of the other combined units have matchings stats now, Black templar neophytes have a 3+ now, for whatever reason
- Command points allow to reroll saves, hits, wounding or charge distance, reroll any single dice throw, negate all terrain in 12” of one of your models, alter the attack sequence, boost psychic block rolls, allow additional reserves and allow units to get another charge phase after wiping out an enemy
- There are some models like Ghazghkull that have their own abilities that are triggered by command points
- perils of the war: snake eyes on the test, d6 on table, d3 mortal wounds and losing a spell are the worst cases
- Player can spend command points to choose who goes first instead of rolling, whoever spends more
- Matched games have a fixed number of turns, 5 or 6 rounds depending on mission, 18” is starting range and turn 1 charges are completely legal
- Reserves are not random, except for rounding: second turn half the units are deployed, third turn half of the remaining, fourth turn rest
- Flyers have an individual to hit modifier, mostly -2 or -3, a 6 is always a hit as usual, depends on the flying mode for flyers that have more than one
- Flyers are affected by heavy weapon malus, but most flyer weapons are assault,
flyer weapons have often a shorter range and a different name, but are otherwise identical to their ground counterparts
- Terrain does not influence movement distance per se. Some citadel terrain pieces half the movement or do other things.
- There are no warzone rules in the core rules
- True line of sight is used to establish line of sight to a model, but otherwise models count in or out of cover depending if they are in a piece of terrain or if they are touching it and the firing - line goes through the terrain
- In matched play, models have a fixed base size specified in the General’s Handbook. In the two other game types, they can use any base they want
5/03/2017
Natfka
40k, 8th Edition, Rumors, Warhammer 40k