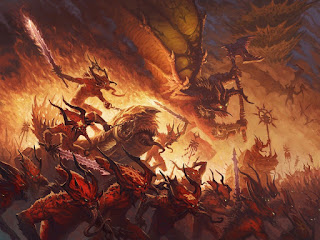 Chaos Daemons are up now, and there is a lot here to check, after all there are 4 Chaos Gods.

First, our mighty lord, Khorne. Khorne is not what you’d call a complex deity. His desires are straightforward: blood and skulls! Next you have Tzeentch, the god of knowledge and self-growth…as in growing a few extra limbs and growing knowledge of forbidden lore that will drive you insane by learning it. Slaanesh is the lord of excess, and the followers of She Who Thirsts are all about (over)indulgence. Lastly, you have the happiest of the Chaos Gods, Nurgle. He brings entropy to the universe with a laugh and a smile, sharing his many generous gifts of flesh-melting diseases and fly-blown poxes. 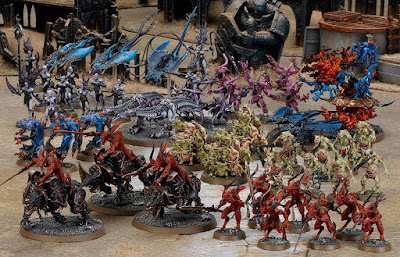 Chaos Daemons are one of the most powerful armies currently in Warhammer 40,000. You’ve got large Screamer units running around with re-rollable 2+ invulnerable saves due to the various bonuses available to them, Daemon Princes flying around the table blasting people with mind bullets, Pink Horrors splitting into Blue into Brimstones. If that weren’t enough, legions of fresh Daemons can currently be summoned onto the tabletop from the Warp at no points cost.

Daemons also currently control the Psychic phase with what feels like millions of Warp charge dice. And I know I am not the only one who loses track of the incredible complexity of the Daemon army. A Daemons player currently rolls on several charts before the game starts to find out what their army does – it feels like you need a flowchart sometimes.

But what about Daemons in the new Warhammer 40,000? Let’s run through this preview one god at a time, shall we?

Khorne blesses his devotees with an increased ability to reap skulls in his name. These models charge up the table taking skulls for the Skull Throne with Unstoppable Ferocity, which grants them a bonus attack and a point of Strength in combat if they charge or are charged. This turns already formidable melee units into killing machines! Your Bloodthirster will be a king of melee when he charges, as he should be.

Tzeentch grants his minions the ability of Ephemeral Form, giving his Daemons +1 to their invulnerable saves. Wow, that’s good! A Lord of Change with that boost will be quite powerful indeed, with a 4+ invulnerable save and SIXTEEN wounds!

Your opponents will come to fear not just the big models though, as even your basic Horrors have the ability to lay low even the mightiest of enemies with their psychic might. You will want to include several units of these in your Tzeentch army to deal with some of the tougher enemy units out there.

Save some Reinforcement Points for Blue Horrors and Brimstone Horrors as well, as these still split out of their parent unit like a series of Russian Dolls and are great for grabbing objectives and keeping enemy units busy long after other units would have been destroyed.

Slaanesh is all about speed, baby. They will almost always swing first in combat, even if they did not charge, due to their Quicksilver Swiftness special rule! This means even relatively fragile units such as Daemonettes can be a threat at all times. They’re one of my favourite units – I own nearly 100 of them at present (I might have a problem) – and I can’t wait to get them on the table.

The good news is that these crab-armed warriors are absolutely lethal, especially if taken in units of twenty or more models. In large units like this, the Graceful Killers special rule grants them a bonus attack with their Piercing Claws (which are resolved at AP-4 when you roll a 6+ to wound!) allowing them to slice through armour in melee. 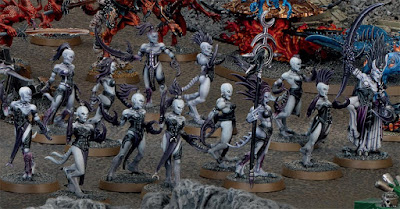 Last, but certainly not least, we’ve got Papa Nurgle and his motley crew. Probably the coolest models in the Nurgle Daemon line are the Nurglings, in my opinion. These little buggers were often taken in the past just to fulfil the Troop requirement, but in the new Warhammer 40,000, they will be taken for their ability to deploy near enemy models and engage them quickly, tying them up or simply getting in their way using their Mischief Makers special rule. That would normally be a very dangerous proposition for a unit of little guys, but the children of Nurgle are Disgustingly Resilient – which means they ignore wounds on a roll of 5 or 6!

Well, that is all we have on the Daemons faction in the new Warhammer 40,000 for today. I hope you all enjoyed the read and are looking forward to spreading the dominion of the Dark Gods to a tabletop near you!