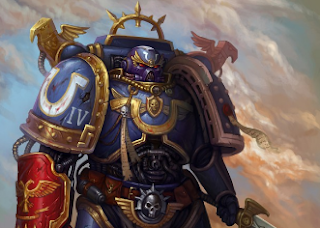 Love the video... Lots of fun. Here are the latest announcement from Games Workshop on just how 8th Edition is going to play out!

Pete:
It’s been a great six months for Warhammer 40,000. The latest batch of FAQs helped improve everyone’s enjoyment of the game and really clarified some of the key rules. And they were possible, in large part, thanks to the help of you guys and the rest of the online Warhammer 40,000 community. I think it’s really great that we’re now developing rules by engaging the community and working with people like Frankie and Reece from LVO, Mike from Nova and Hank, Greg, Chris and the rest of the AdeptiCon team.

So tonight we wanted to share with you some of the rules concepts that we’re currently working on and give you a quick peek at some stuff that maybe you’ll get to use this time next year at AdeptiCon.


3 Ways to Play
The General’s Handbook has been one of the most popular rules supplements we’ve ever released. Who’d have thought letting people choose how they wanted to play their games and giving them a clear way to do that would be so popular…? It’s pretty clear from talking to a number of event organisers, that Warhammer 40,000 would benefit from the same approach. So we’ll soon be introducing the same 3 ways to play – open, narrative and matched play – to the 41st Millennium.

Army Selection
One of the things that comes up a lot is the idea that people should be rewarded for taking thematic armies. It’s a sentiment we agree with and so we’re looking at introducing Command points. A mechanism to reward players who structure their army like their in-world counterparts, with rerolls and cool army specific rules throughout the game.

Movement
We think the Move value should come back. No more default unit types. Every model should have cool bespoke rules. Not only would that be more fun, but it’ll mean you will only need to learn the rules for your models.

Shooting
Armour save modifiers. This topic comes up almost as often as Sisters of Battle… so we’re going to bring them back. Every weapon will have its place in your army and better represent how you imagine them working in your head.

Combat Phase
Charging units should fight first. It’s just more thematic. So we’re hoping to work this out as well. It will reward tactically outmaneuvering your opponent. You can dictate the combats rather than being entirely Initiative based. You control who swings first.

Morale
Its no longer all or nothing, and it affects everyone. We’re thinking of replacing break tests with a simple mechanic. Roll a D6, add that to the number of models your unit has lost this turn, subtract your Leadership and take that many additional casualties.
3/22/2017
Natfka
40k, 8th Edition, News Headlines, Warhammer 40k