Big Updates for Dropfleet Commander+ Corvette Pre-Orders are Up! 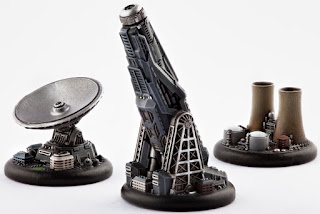 Big updates from Hawk Wargames this morning,... just moments ago, and these are exciting to see Corvettes being up for pre-orders now!. Just as well an exclusive Saratoga Class Light Cruiser model is also up for sale for a short time only. (the model is an alternate sculpt for the popular New Cairo Class Light Cruiser).

Also some new experimental rules available now, as well as a preview of some new ground models to fill up your clusters and protect ground assets. 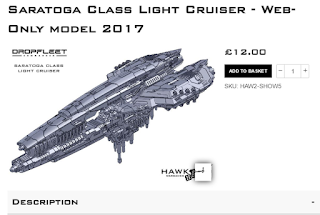 We are pleased to be able to present to you all the web only model in celebration of the relaunch of our website.

This highly detailed resin ship is the UCM Saratoga Class Light Cruiser, an alternate sculpt for the popular New Cairo Class Light Cruiser. It will be available exclusively on our website until April 21st. After this date, it will be on sale at Salute 2017, along with a few other select shows that Hawk Wargames are attending. After that, this miniature will not be available again, so get yours while you can!

The Saratoga is an experimental development of the New Cairo class Light Cruiser with a focus on efficiency, incorporating the very latest systems. While the New Cairo inherits many core attributes from the older Rio class (itself several decades old), the Saratoga features an entirely new prow and amidships superstructure, conceived from the ground up.

Early field reports of the class in action have been exemplary, showing the ship able to provide equivalent combat performance to the New Cairo while consuming less energy and requiring fully half the crew to operate effectively. The few in service have served with distinction and none have thus far been lost to the enemy, leading officers and enlisted to declare it a uniquely lucky class.
Unfortunately for the Admiralty, the Saratoga's were built exclusively at the FSI (Ferrous Shipping Industries) yards over the planet Ferrum which were entirely destroyed during the Scourge onslaught in late 2671. The yards had turned out a meagre 12 vessels for early void trials before their loss, making this one of the rarest ships in the UCMF. Compounding this, several proprietary systems were integral to the design and the subsequent collapse of FSI makes future construction of the class unlikely.

Along with this model, we also have a range of models available for a limited time to celebrate the relaunch of our website.

They can be found here in our Website Relaunch Sale > and include a selection of the show only models from previous years.

Corvettes are up for Pre-Orders
https://www.hawkwargames.com/collections/new-releases
Each Corvette Blister contains 6 highly detailed resin Corvettes, along with 6 flight stands and bases. 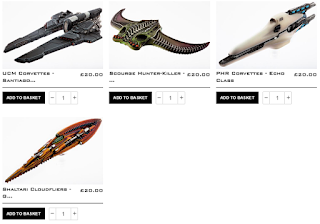 Some Experimental Rules Updates
Below is a brief summary to induduce this experimental Rules update document, which can be found here >
"To all Dropfleet gamers, Firstly, we’d like to thank you all for playing the game and for your continued enthusiasm and feedback. Since Dropfleet’s release, we’ve been watching and listening to the community as it gets to grips with this new and exciting game. As always, balance, competitiveness and enjoyment are extremely important to us and going forward we intend to always work to keep the system as good as it can be - To that end, we’re always open to making changes if they will improve the gaming experience. The aim is always to make every unit viable and to give players many and varied routes to victory.

Normally (as regular Dropzone Commander players will know), we release rules changes and errata online as the system evolves. We have already released the first Errata and FAQ documents for Dropfleet and after taking in sufficient feedback, we feel it’s time to make some adjustments. Since Dropfleet is a brand new system, we’re making this document experimental and optional. If you like, please try these new adjustments, mull them over, talk about them and give us feedback. These are in no way final and are open to changes! In this new experiential format, we’ll run through our rationale behind many of the proposed changes. Once we’ve taken in this feedback, we’ll re-release this document in a revised and official form. Changes #1 and 2 would be incorporated into the official Tournament Pack rather than in Rules Changes.

Thanks again for your support and enjoy the game!
David J Lewis and the Hawk Wargames Team"

Lastly, we are also working on the remaining sectors that have not yet been released, and are happy to show how these are looking: 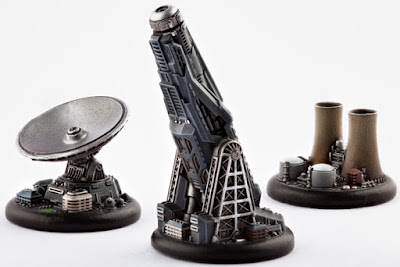