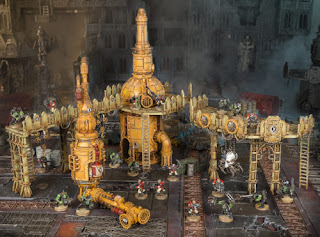 Always good to get these details and what models we will be able to use in this upcoming game, scheduled for an April Release.


War Returns to Armageddon!
We did say you wouldn’t have to wait long to find out more about this game.

Take a look at the new trailer for Shadow War: Armageddon


So, it’s a new, self-contained game set in the hive cities of Armageddon, with Orks against Space Marines and the option to add almost a dozen more factions? Sounds pretty cool to us.

Those veteran gamers out there will be keen to learn that much of the ruleset is based off of the classic Necromunda game, including some in-between game advancements and earning experience that can see your small recon-force grow to become an elite unit of honed killers.

The terrain is perhaps the star of the set though. Never before has the tangled structure of an industrial hive been better represented. Your warriors can hide behind chimneys, sprint along walkways, gain higher ground, duck under arcane mechanisms, and generally make full use of this great new set.

The kits are, of course, also suitable for Warhammer 40,000 games, and it is fully modular, meaning you can combine kits in all sorts of unusual ways to create some truly huge and awesome terrain pieces.

You’ll be able to expand your game with extra models for the two squads in the box, or even add whole new races. The Kill Teams are all designed to be built around squads in an army you might already have, or can pick-up in a single boxed set. Here are a few of the units that you will be able to use, in case you wanted to get started building and painting now: