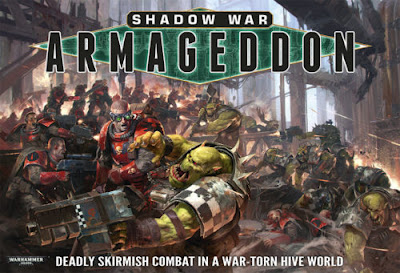 Necromunda is being announced at the Gamma Trade Show today, and its new name is Shadow War Armageddon.


Orks and Space Marines will be in the box along with lots of terrain and rules.

We think the idea of close-range combat amongst the sprawling ruins of Imperial industry sounds pretty ace.


from the Dice Tower


Right after Portal Games not that far in. Plus it shows off a new starter set for the Age of Sigmar, Thunder and Blood. It shows looks to come with quite a few miniatures that are push fit colored. plastic.. This will be out this Summer.
3/14/2017
Natfka
Age of Sigmar, Games Workshop, Necromunda, News Headlines, Shadow Wars Armageddon