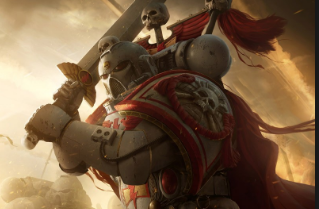 While the rumored pic of a larger scale marine has been very much killed by sources here on Faeit 212, we are getting a follow up, laying out that yes, something new is coming. Here is the very latest on what we will be seeing in the future.


Again, these are from a very solid source that has been around for a long time.

via anonymous sources on Faeit 212
Mark X is the design of the new marine kits.  They are reverse compatible.  It's a facelift more akin to the Deathwatch than anything else.  There is new narrative to bring the armor into the game.  This includes justification for how the bits will show up in non-new chapters, but I can't go into any more detail on that.

I cannot confirm the contents of a new getting started set at this time.

3-Pack models is something that's been discussed for some time.  They will replace the current punch-fit plastics to help people get started for those that do not buy a starter-set on their first trip into a Games Workshop.  They are re-arrangements of current plastic ranges onto smaller butterfly sprues.  Thus you'd be getting the same quality models, and can be used by new players for a small monetary investment, or veteran players who only need a few more bodies for a particular task (for example, buying a tactical squad + 1 to have a meltagunner, flamer, plasmagunner and a gravgunner, in what is a 13 man squad you pick 10 of).


Previously on Faeit 212 (from the same source)

The image you have circulating of the dual wielding marine is a kitbash fake.
It was discussion of the image that spawned the first rumor: "I saw it, it had sigmarite-like legs, a longer bolter" etc and not the other way around.  People seem to think the first rumors gained validity by the model that followed, but it's the other way around.
The image you have been circulating is not a legitimate product.
There are new marine kits coming.  There are always new marine kits coming.  At this time there is no intention to change the scale of space marines, due to the importance of cross-compatibility of bits.
3/16/2017
Natfka
40k, 8th Edition, Rumors, Warhammer 40k