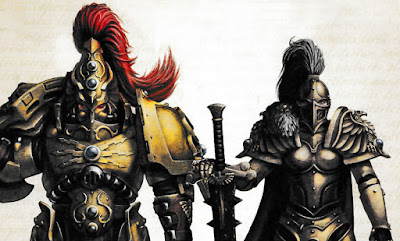 We now have confirmation that the Sisters of Silence and the Adeptus Custodes will get their own codex inside the Talons of the Emperor. It's assumed that you will also be able to order each one online as well, since we saw the accidental posting of the Custodes Codex last week, but perhaps that will be next week.

Talons of the Emperor - 160$
-5x Custodes, 5x Sisters of Silence, 1x Contemptor Dreadnought, 1x Venerable Landraider, 1x Null Maiden Rhino.
-2x 24 Page Codizes for each, Sisters of Silence and Adeptus Custodes. the books are only within the box.
-Datasheets and Special Rules, Warlord Traits, Wargear, Special Issue Wargear and Vehicle Equipment
-Custodes get the Golden Legion Detatchment aswell as the Aegis of the emperor Formation
-Sisters of Silence get the Null-Maiden Taskforce and the Psychic Abomination Formation

Adeptus Custodes: custodian Guard - 60$
-The same Models as in Burning of Prospero

Astra Telepathica: Sisters of Silence - 40$
-The same Models as in Burning of Prospero