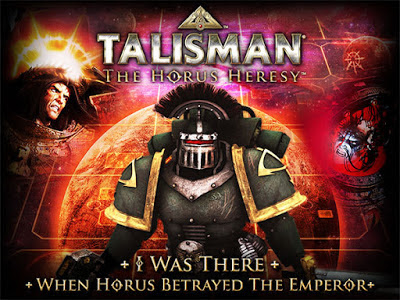 Nomad Games has offered us 4 free Talisman Horus Heresy Game codes to giveaway on Faeit 212. This is the game that we have been talking about now for awhile, you've seen at Warhammer Fest, and on the Warhammer App. There are several fun Horus Heresy expansions planned, for the game, and we had that information here first on Faeit 212.


Faeit 212 Giveaway: A  game codes will be given away randomly to 4 readers who leave the name of their favorite Horus Heresy character (currently featured or about to featured in the game), in the comments below. Only one entry please. The giveaway starts now, and ends Monday night at Midnight Pacific Standard Time.


Previously on Faeit 212
For those of you who have not yet tried this game, its out now for PC and Andriod, with IOS gameplay coming right around the corner... hint hint. It really is a beautifully done game, one that we have talked about before here on Faeit 212. If you are not familiar with it, check out the video below.

The new expansion for Talisman: The Horus Heresy.
At the moment the working title is The Isstvan campaign, the expansion will work in a similar those in Talisman: Digital Edition.

The Isstvan Campaign expansion allows the player to explore the events of The Horus Heresy around the Isstvan System in more detail and play with some of the key characters and Legions that fought there..

The Expansion has 6 new Warlords for you to play.
For the Traitors we have Fulgrim, Perturabo and Lorgar.
For the Loyalists we have Ferrus Manus, Garro and Saul Tarvitz.

Each Warlord also has his own unique Legion of units that he must re-unite with, such as Pheonix guard for Fulgrim and the Iron circle for Perterabo etc.


About Talisman: Horus Hersy
Talisman: The Horus Heresy is a digital board game based on the Talisman rule system and set in the Warhammer 40,000 universe, during the cataclysmic events of the Horus Heresy.

The new combative team play will appeal to fans of Talisman and the Horus Heresy alike. It’s a unique adaptation of Talisman that has been tailored specifically for digital platforms.

In Talisman: The Horus Heresy the player’s experience of Talisman is scaled up exponentially, exploring not a kingdom but a whole galaxy in the 31st Millennium. No longer will you be fighting for the Crown of Command, but for the very future of humanity…

Command one of the eighteen Space Marine Legions that fought during the Horus Heresy
Play as one of eight of the galaxy’s greatest heroes or most notorious villains such as Roboute Guilliman or Angron
Multiplayer modes for up to 4 players
Challenge your friends locally and online
Play against AI opponents
5/22/2016
Natfka
Gaming News, Giveaways, News Headlines, Talisman The Horus Heresy