New Characters from the Xilos Expansion 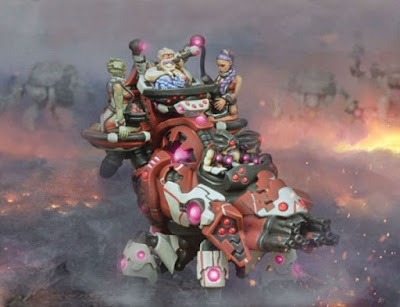 The Battle of Antares has a new expansion coming, and today Warlord Games is giving us a preview of that character along with a look at the rules for him.

You may recognise Karg’s name from Fartok’s backstory in the Antares core Rulebook (page 240) – but ‘The Battle for Xilos’ includes much more detail on Karg… here is just a snippet (please note that some sections have been removed, and other segments are excerpts of longer/larger material from the book.)

Ghar High Commander Karg 12-40-9
Since the defeat and disgrace of the renegade High Commander Fartok, Karg 12-40-9 has become by far the most successful and most highly favoured of the Ghar Empire’s many commanders. The Supreme Commander himself has rewarded Karg with yet greater responsibilities and ever growing armies to support his selfless efforts on behalf of the Empire. Like all Ghar, Karg is a clone bred upon the homeworld of Gharon to serve the sole purpose of the Ghar race: to rid the entire universe of abomination! Untold millennia ago the Ghar race was genetically engineered to fight an unending war against the degenerate races of humanity, to hate their enemies with an undying hatred, and to serve their own kind with unbreakable loyalty unto death itself. For that is the nature of Ghar. The Ghar will prevail!

Except that Karg is quite unlike any ordinary Ghar. Karg was one of a series of genetically improved clones created to form the next generation of top-ranking leaders and commanders. Karg is possessed of mental powers both considerable and unusual for his race; perhaps more unusual than the Supreme Commander’s geneticists intended. For Karg is ambitious, hungry for power, willing to put his own interests over and above all Ghar-kind… over and above even the Supreme Commander.
Karg has established a base of operations on Xilos, a world ideally placed to launch further attacks upon the hated Algoryn. The world has been turned into a fortress, but its substantial defences prove unable to keep the enemy from effecting a landing. With his fleet driven from orbit Karg is forced to send for reinforcements. Unfortunately his messengers are captured by Karg’s old enemy Fartok, and instead of the reinforcements he was expecting he finds himself with another battle on his hands as Fartok’s slave army hunts down the rebel leader’s old adversary.
Karg

Mastermind (excerpt) …Karg is a military genius of a new kind, possessed of both vision and imagination. These same qualities make him only too aware of the potential dangers to which he would sooner not be exposed. The Mastermind rule therefore comes in two parts – one to reﬂect Karg’s undoubted genius, the other reﬂecting his extraordinarily un-Gharlike sense of self-preservation. If the player gives Karg a Rally order and passes any order test required, then in addition to removing the extra D6 pins from Karg as usual, every Ghar unit within 10” of Karg also removes 1 pin if it has any. If there are enemy units within 10” of Karg then the only order he can be given is Run and this order cannot be used to initiate an assault.– See page 108 for further explanation.

Ruthless If Karg uses his Command rule to boost the stat value of a Ghar unit add a further +1 bonus. I.e. instead of testing using a stat of 9 the unit will use a stat of 10. Karg’s reputation for dealing ruthlessly with failures is a great motivating force!

Hand-Picked Crew Karg’s specially selected crew are not only the best of Ghar-kind but are only too well aware of what fate awaits them should they fail their master. If the unit fails any reaction test against its Initiative then it can immediately take the test again, and if it passes this second time no pin penalty is applied. However, if it fails a second time the usual pin penalty is doubled, i.e. the unit takes 2 pins on a fail and 4 pins on a critical fail of a 10.