Beyond the Gates of Antares: Ghar Attack Scutters

Beyond the Gates of Antares has a new release for the Ghar today, Attack Scutters. 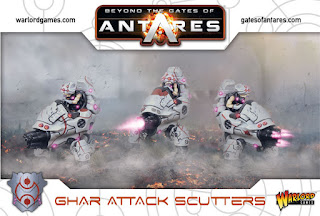 http://us-store.warlordgames.com/products/ghar-attack-scutters
Attack Scutters are little more than Scutters with their bombloading
equipment and ammunition removed enabling them to operate in a fighting role. This makes them more agile than regular Scutters although in other respects they are practically identical.


Attack Scutters are used as general transports as well as for scouting and exploring and may often be the first Ghar encountered by the enemy. Attack Scutters carry a Scourer Cannon so they are potent little machines even if they are not as well protected as battle armoured Ghar troopers.

This is a resin and metal kit - the three models included are supplied unpainted and unassembled.
5/27/2016
Natfka
Beyond the Gates of Antares, Gaming News, New Releases, Warlord Games