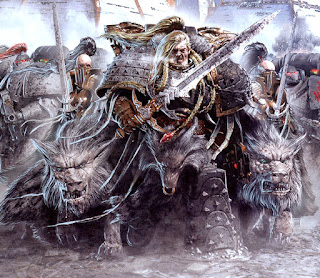 A couple bits of information here that are interesting. I had a series of 5 or so, and somehow blogger ate them last night while the article was in draft form. So besides chaos daemons dragging it off to the warp, I thought I would post up the two that I still had. (thanks to yog for one of them.).


Asked Why Leman Russ Wont have a Beard his primarch model.
via Wildrider
This was asked as a question by someone at the Seminar (by a guy with a big beard....)
Basically, the answer was that it had been debated, but they decided no beard as it's a depiction of a comparatively young Russ. Maybe when all the first round of Primarchs are done, and we start getting chaotic/Daemon variants - maybe then you'll get a 'beardy' Russ variant too...


On a new edition of 40k
via Squiggly
"Not just on the rules front either, but fluff too. Think the "End Times" without the actual "End Times" and you wouldn't be far off the mark. Not as big as an AoS level shakeup, but a light refresh to the game.
5/19/2016
Natfka
40k, 7th Edition, Rumors, Warhammer 40k