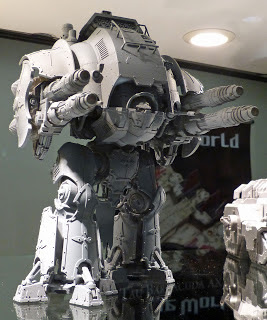 The title says it all, more pics and information that needs to be shared, thanks to Rictus.

via the Recalcitrant Daze (visit the site for additional information and more pics)
http://recalcitrantdaze.blogspot.com/

Adeptus Titanicus.
Ok, not exactly much to show here except the poster below.
However talking to Andy Hoare, Mark Bedford and Chris Drew I can mention the following:
The game is set during the Horus Heresy in the spirit of the original Adeptus Titanicus.
It will begin with just Titans.
The scale will be 8mm - They decided on this scale after 3D printing a Marine, Dread, Leman Russ, Warlord and a Mastodon in three different scales. 8mm was deemed the best as you could see the details to the point of telling different armour marks apart but didn't make the Titans too big.
8mm will make a Warlord around 6" tall (that's what it looked like why Andy Hoare put his hands apart, don't blame me if the final model is smaller or larger...).
The models will be produced in resin by Forge World.
Typical force may be in the region of two Warlords, two Reavers and two-three Warhounds.
More Titan variants are possible.
Down the road infantry and tanks are to be introduced.
Other forces are also possible, this includes Xenos which can be introduced in a themed expansion, e.g. Adeptus Titanicus: Armageddon to bring in the Orks.
Currently the Titans are being 3D modelled by Chris Drew, the Warlord has been done as the 40k version was originally 3D modelled so it was a case of just scaling things down and getting it to work as a model which can be manufactured.

We may, may, get to see something at the Forge World Open Day...(may, depending on Tony Cottrell) 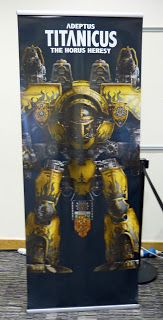 Blood Bowl.
I will do a few posts covering today's event, starting with Blood Bowl...

Had a number of conversations with the team, especially Andy Hoare who put up with me going back about four times (though one conversation was mainly to do with Adeptus Titanicus). Thankfully he is a man with a lot of patience.

First up what I can remember:

The release is hoped to be end of the year.

Box set contains the first two teams, Orcs and Human in plastic.
The pitch is double sided with a Human pitch on one side and an Orc pitch on the other.
The rules have not been changed, they are the rules which has been around for a while now.

In total there will be six teams in plastic (Human, Orc, Skaven, Elf, Nurgle and Dwarf). Other teams will follow in resin. There is also likely to be resin conversion sets.

There will be more pitches which will also be double sided (Dwarf/Skaven & Elf/Nurgle) with more possible later including tournament specific ones.

They are looking at neoprene pitches but as yet they don't know, it comes down to cost and if they can get them in large enough quantities and other factors but it is something they would like to have.

Several expansions are mapped out including the first one covering seven more teams and league rules.

If all goes well Dungeon Bowl will also see the light of the day. 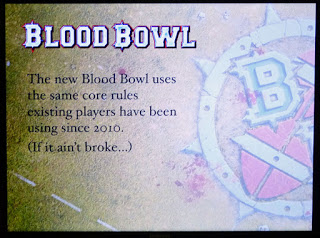 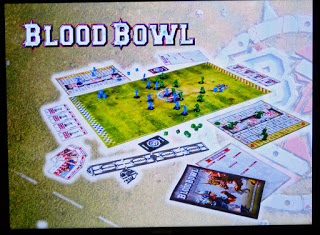 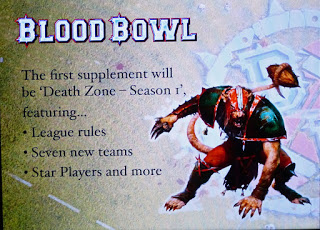 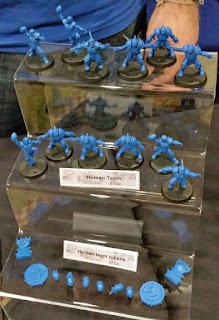